The A Block once again takes center stage, as day 7 of New Japan Pro Wrestling’s (NJPW) annual junior heavyweight tournament brings four more matches to the table. The matches for this round of the Best of the Super Juniors 25 are:
– Flip Gordon vs Tiger Mask:
– ACH vs YOH
– Yoshinobu Kanemaru vs Taiji Ishimori
– BUSHI vs Will Ospreay

[Please note: to save myself a bit of time, I am only reviewing the tournament matches. There are potential spoilers here from the first rounds of A Block matches.]

+ BUSHI vs Will Ospreay (A Block Match): god damn, this was really great. When all the matches in the tournament are good to great, it is nice to have a great match with a nice, simple, ‘good guy versus bad guy’ story to go with it. Ospreay was the beaten down champion, my boy BUSHI is the dirt-worst person you could imagine, and the two of them put on a clinic, which the crowd was losing their minds for
+ Yoshinobu Kanemaru vs Taiji Ishimori (A Block Match): two of the A Block’s top dickheads, for lack of a better term, more or less tried to simply outwit the other. Ishimori did bust out a variant of Kota Ibushi’s Golden Triangle Moonsault, which was interesting to say the least. This didn’t go the same say that Ishimori/Flip Gordon did from day 5, but it was similar in some ways, though I liked it much more here
+ ACH vs YOH (A Block Match): this battle between two of the tournaments strongest was a visual spectacle, not just because ACH looks so much bigger than YOH but they both have supreme power to spare. This was a lot of fun, but once again, nothing special in a tournament full of special matches 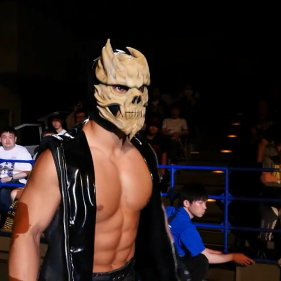 A show of respect between Tiger Mask and Flip Gordon before their match (editor’s note: Tiger Mask is the one with the mask that looks like a tiger)

– Flip Gordon vs Tiger Mask (A Block Match): there were a few cool transitions and reversals here, but for the most part this was as standard as it gets. All you really need to know is that Tiger Mask had the experience edge, and Flip flipped a lot

> BUSHI, in his entrance attires, gives off a real La Sombra vibe – which is so obvious, in hindsight. I am disappointed it has taken me this long to make that connection

Should you watch this event: I feel bad that it seems I am ragging on Tiger Mask every time I do these reviews — it’s not that he is bad, of course, he just doesn’t fit in too wel with the much younger, much faster and more agile workers. It is similar to Jyushin Liger last year: it made for some really good moments when he worked with people he had not worked with before, but for the most part the matches were just not very good. Go out of your way to see BUSHI/Ospreay from today, but don’t fret over the rest of it.