New Japan Pro Wrestling’s (NJPW) annual junior heavyweight tournament continues, with four more matches from the B Block, including a huge main event as Dragon Lee and Hiromu Takahashi renew their legendary rivalry. The matches on day 6 of the Best of the Super Juniors 25 will be:
– Marty Scurll vs Chris Sabin
– Ryusuke Taguchi vs KUSHIDA
– SHO vs El Desperado
– Dragon Lee vs Hiromu Takahashi

[Please note: to save myself a bit of time, I am only reviewing the tournament matches. There are potential spoilers here from the first rounds of B Block matches.]

+ Dragon Lee vs Hiromu Takahashi (B Block Match): this was always going to be good, and it was everything you could hope for. It is almost a shame this was one of the ‘not full show’ shows, because with a bigger crowd, some hyped up commentary and more dynamic camera work this could have been even better. These two traded some of the sickest overhand chops you’ll ever hear — moreso when you consider that the sound is being caught from the hard-cam, and they are STILL that loud. Only one sequence stood out as silly (a suplex trade that went on too long, too late in the match) in an otherwise unbelievably good showing from both men
+ Ryusuke Taguchi vs KUSHIDA (B Block Match): when this happens, it either breaks the show or makes the tournament (for one guy at least). I really enjoyed this match for exactly what it was
+ Marty Scurll vs Chris Sabin (B Block Match): Sabin and Scurll went back and forth bending the rules and playing to the crowd, and it made for an entertaining affair. I’m a sucker for when the referee gets involved in a comedy spot, and this was no exception. Hardly a show stealer, and the very last move was a bit rough on the loser, but this was still a lot of fun

El Desperado, no longer the nice guy from last night

Taguchi and KUSHIDA go ass-to-ass in their battle 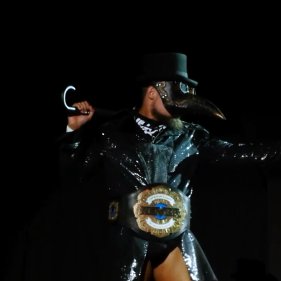 – SHO vs El Desperado (B Block Match): any good will that Despy had built up with the fans in his match against Takahashi was out the window here, as he was as slimy a heel as you could hope for against SHO. This was a really solid, if not overly unique match, but the ending really soured me on the rest of the match

> I know NJPW shies away from disqualifications, but sometimes it is to their own detriment. At least two of these four matches had moments that would have been straight up DQs in any other promotion in the world. It is confusing, and a bit frustrating.

Should you watch this event: It seems that every time there is almost the best night of the the tournament, something has to ruin it, whether that be how a match ends, one winner over another or simply one match that is not as good as the rest. Unfortunately, the same thing happened here, but even with that said, Takahashi/Lee in the main event was so damn good I’ll almost forgive it. Almost.