The junior heavyweight tournament continues, as New Japan Pro Wrestling (NJPW) presents the Best of the Super Juniors 25. Set to take place are all the next matches from the A Block of the tournament, and they are:
– Tiger Mask vs BUSHI
– Yoshinobu Kanemaru vs ACH
– Flip Gordon vs Taiji Ishimori
– Will Ospreay vs YOH

[Please note: to save myself a bit of time, I am only reviewing the tournament matches. There are potential spoilers here from the first rounds of A Block matches.]

+ Will Ospreay vs YOH (A Block Match): this was really, really good, as should be expected from a Will Ospreay main event by now. Both these Ropongi 3k boys, SHO and YOH, have had fantastic tournaments so far in their separate blocks, and this was no exception. If they, and so many other junior heavyweights, can hang with ospreay in the ring in terms of speed and accuracy (though there was one near miss that I saw here from Ospreay) then we are in for a wild few years of junior heavyweight action
+ Yoshinobu Kanemaru vs ACH (A Block Match): another match that started really slow (maybe the crowd just took a while to get going each time?) eventually this was a great match to listen to, if not watch. ACH did do a freakin’ incredible kick at one point that sounded like a gunshot
+ Tiger Mask vs BUSHI (A Block Match): this started off quickly, but soon turned into a bit of a slog, but it picked up towards the end, and I am happy to say finished on a high note. Tiger Mask, as easily the oldest in the tournament, works perhaps the least ‘flashy’ of the tournament competitors, but his good will from the fans more than makes up for the lack of flips

Will Ospreay, the reigning junior heavyweight champion, has a hard task ahead of him if he wants to make the finals again

YOH is having a hell of a tournament 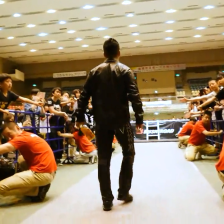 Yoshinobu Kanemaru saunters down to the ring

Taiji Ishimori, with abs you could grate cheese on

– Flip Gordon vs Taiji Ishimori (A Block Match): gosh, this was perhaps the biggest disappointment so far. Flip is by no means the best wrestler, but I really thought this could have been something special. I understand why they did what they did, but in my humble opinion, it did neither of them any favours. I still love Ishimori’s Bone Soldier theme, though
– much like Day 3, these A Block matches were hampered by the lack of commetnary and the often static camera angle. I’ve tried to review the matches as best I could, but the almost 2d view does make it difficult

> I’ve noticed a trend as the tornament continues, where someone will hit a big move, their opponent will kick out in a shock, so the first guy just hits another big move straight away and wins. It’s… awkward, now that I’ve noticed it (and sorry in advance for ruining it for you, too)

Should you watch this event: Were it not for the way that Flip/Ishimori finished (and perhaps if this were one of the bigger shows, with commentary and cameramen etc.), this may have been one of the better days so far. As it stands, though, Ospreay again put on a clinic in the main event, and while at least two of the other matches were good, once more there was otherwise nothing ‘must see’.