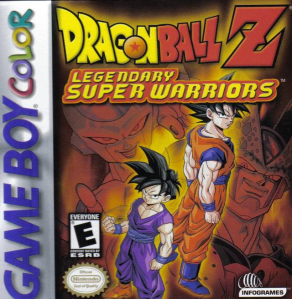 I’m a big fan of the entire Dragon Ball series (and a new series has just been announced!), and I’ve played most, if not all of the western released games, but the one I enjoyed the most, and still enjoy to this day, is Dragon Ball Z: Legendary Super Warriors on the Game Boy Color. It featured a huge number of character sprites to play as, and used a card-based system for all the fights, taken directly from the anime series.

Playing almost more like the Pokémon card game that the other straight-up fighting games, LSW had players create a deck of cards, each with offensive, defensive or support effects. In battle, you would choose from a three, four or five stage attack, which, if completed via successful button inputs, would give you that number of points to spend on stronger attacks. You could also ‘power up’, giving you increased damage, and access to the cards set as your ‘power attacks’, such as Goku’s Spirit Bomb. Each deck could have 20 cards in it, so you could mix in some higher powered attacks to strike when the enemy AI was not expecting it. After finishing the story once, the story could be replayed infinitely, and any character could be used to fight any story villain, so Super Saiyan 3 Goku could stomp Nappa flat pretty quickly.

The game featured a (surprisingly) large roster of both Dragon Ball heroes and villains, with multiple modes where applicable (such as base form, Super Saiyan 1, 2 and 3 for Goku). Unfortunately, Frieza only had his final form, and not his awesome Alien-style third. To unlock certain characters you had to defeat certain story bosses with certain characters, including defeating the team of Jeice and Burter of the Ginyu Force using only Goku (without a partner). To unlock some characters also required losing to certain characters, so I am not ashamed to admit it took me several playthroughs to unlock every character.

The game filled 27 slots with characters, but left three blank spaces after, which made it appear as if there three more unlockable. Back before everything about every game was available on the internet, there were fake cheats and rumours as to who the final few were, including anyone from Hercule Satan to fights from other games. Fake sprites all over the webpages where the (not real) characters were mentioned didn’t help. This was the first time I thought to question “unlockables” I read about on the internet.

Although it wasn’t a pure fighting game like many, if not all of the other Dragon Ball Z games, Legendary Super Warriors was perhaps the best at portraying each battle, in order, and making me want to win. I cannot count the hours I spent playing this, and then telling my mum I was too sick to go to school, just so I could play it even more. I must have gone through hundreds of batteries in my Game Boy Color, and I absolutely loved every second of it.