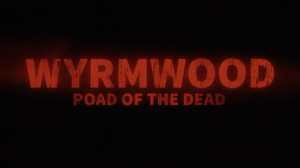 + main characters Barry (Jay Gallagher) and Benny (Leon Burchill) have great chemistry and play off each other well
+ Berryn Schwerdt obviously loves his role of a crazy doctor, and his many scenes are the highlight of the film
+ customary Australian humour and accents, which I had no issues understanding (which is obviously because I am Australian)
+ interesting plot developments stop this from being a boring zombie killing bore
+ filthy gore is great, but never disgusting. Expect to feel like you should be wearing a raincoat

– a strange clash between biblical or scientific reasons for the zombies are never quite fleshed out (hilarious pun intended)
– similarly to the above, supernatural elements also take hold, somewhat out of nowhere

> The Mad-Max influences are on full display, and it makes for something above average in the potentially ‘running on fumes’ genre

Should you see this film: Yeah, certainly. It has all the makings of a standard zombie flick, but Australian humour, and unknown (to me, at least) but enjoyable cast and some interesting changes to the formula make it one to watch.