Released in 2021, Spider-Man: No Way Home is a superhero action film directed by Jon Watts, directly continuing the story of Spider-Man: Homecoming (2017) and Spider-Man: Far From Home (2019) in the Marvel Cinematic Universe (MCU). Having had his identity revealed following the death of Mysterio in Far From Home, Peter Parker / Spider-Man (Tom Holland) must adapt to his new life with his girlfriend Michelle “MJ” Jones (Zendaya), and no secret identity. In an attempt to use magic to undo his identity reveal, Parker enlists the aid of Doctor Stephen Strange (Benedict Cumberbatch). But when the spell goes wrong, former villains from across the multiverse are summoned, including Norman Osborn / Green Goblin (Willem Dafoe), Otto Octavius / Doctor Octopus (Alfred Molina), Max Dillon / Electro (Jamie Foxx), Dr Curt Conners / Lizard (Rhys Ifans), and Flint Marko / Sandman (Thomas Haden Church). Also reprising their roles from previous films are Ned Leeds (Jacob Batalon), Aunt May (Marisa Tomei) and Happy Hogan (Jon Favreau). Spider-Man: No Way Home is the third solo Spider-Man film in the MCU, the eighth live action Spider-Man film since 2002, and the 27th overall film in the MCU.

+ this may not come as a surprise, but Dafoe and Molina were both superb, though Dafoe’s Goblin will surely be everybody’s highlight. This was Holland’s biggest movie to date, and acting against the likes of Dafoe and Molina, and even Cumberbatch and Foxx, he certainly held his own. It is worth repeating just how good Dafoe is in this movie, nearly a decade after his first turn as Spider-Man’s biggest foe, before anybody could have guessed just how big superhero movies could become
+ there are some good surprises. I genuinely can’t go into any more detail for this point, but when the movie tells you not to spoil this for people before they see it, take it seriously
+ the action is of course visually spectacular, thanks in large part to the athletic movements Spider-Man has always had (there is a reason Spider-Man has twice now made an appearance in two of my favourite video games). Things like Electro’s lightning and Goblin’s glider all look and feel great, but it was the first appearance of Ock that really got me going. Spider-Man 2 is one of the best superhero movies of all time for a reason, and this was shown again here
+ I’m still such a sucker for Jamie Foxx’s Electro. I know he was polarising (hilarious magnetism pun intended; does polarity have anything to do with electricity? I don’t know, I’m not a nerd) but that dubstep theme is just great every time 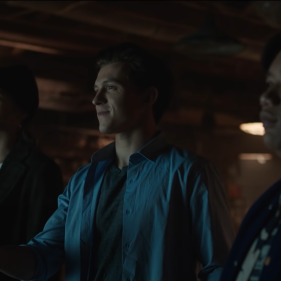 – Doctor Strange (Cumberbatch) was very out of character and unenjoyable in this. A seemingly large revelation about his character is given away in a near throwaway line, but even that wouldn’t excuse just how careless, reckless, and dangerous he comes across in agreeing to cast a spell like this in the first place
– usually I can overlook smaller nitpicks, but there lots of plot holes all throughout this, including the immediate ending and aftermath which makes absolutely no sense. Keeping up with Marvel tradition is the mid-credits stinger, and I was left beyond infuriated at what happened there
– the quick, “witty” style of dialogue makes sense coming from Spider-Man himself, but I can’t stand the fact that these “Marvel quips” have turned everyone into a comedian. Doctor Strange should not be making jokes about Scooby Doo, anyone being stabbed shouldn’t make light of that fact, and imminent danger does not make for witty one-liners

> though not quite either plot holes or negatives, there were a lot of missed opportunities for moments not referenced between different dimensional villains; as far as we know, Ock and Goblin have no idea who Electro or Lizard are, but they certainly should
> frankly, there are a lot of call backs and references to the previous five films, and you’ll get a lot more out of the nuances if you are familiar with, or have recently watched the Sam Raimi trilogy and the Marc Webb duology

Should you see this film: Overall, this was good and perhaps even very good, but I can’t say it was sensational, spectacular or amazing. I walked out of the cinema thinking it was a masterpiece, but the more I think about it the less it made sense, and the less I enjoy it in hindsight. If only there was a previous Spider-Man trilogy ender that crammed too much into it that we could have learned from.