[Please note: to save time, I will review only the tournament matches themselves, and split them into as big a chunk as I can. Here are the quarter final matches. You can find the first round here and here, and the entire second round here.]

New Japan Pro Wrestling’s (NJPW) annual tournament, the New Japan Cup 2021, is into the quarter finals, as eight men become four across two huge nights. On the tenth night of action, Toru Yano will look to outsmart the King of Darkness, EVIL, of the Bullet Club, while in the main event, another Bullet Club member, KENTA, will face The Dragon of Los Ingobernables de Japon, Shingo Takagi. The possibility of an all-Bullet Club semi final looms large, but Yano and Shingo will both be looking to ruin those plans. Just two nights later, the Commonwealth Kingpin, Will Ospreay, must face the 2020 G1 Climax finalist, SANADA to earn a spot in the semi-finals, before arguably the biggest surprise of the tournament, David Finlay, must face the ruthless Bullet Club leader, Jay White. White is looking to make this the New JAY-pan Cup, so Finlay will have his work cut out for him, and the idea of either man against Ospreay or SANADA is mouth-watering.

+ Will Ospreay vs SANADA (New Japan Cup 2021 Quarter Final Match): this was good, but certainly not great. SANADA has been unimpressive for a while now, and this was no exception. Ospreay looked really good in this match, though, even with his very clearly buggered-up nose. Ospreay’s nose did also play into the story, which added a bit more to this than just ‘two guys who are good at wrestling’, but overall this match was only barely a positive. Whenever SANADA next takes some kind of break, he needs to work something out for himself
+ David Finlay vs Jay White (New Japan Cup 2021 Quarter Final Match): holy smokes, I loved this. Jay White is one of the best wrestlers in the world, and Finlay is coming off that fantastic fight with YOSHI-HASHI, so I had high hopes and I was not disappointed. White battered Finlay around, including some really rough looking throws into the corner pads, but Finlay always seemed to have a great counter at just the right time. This was really good, and is making me a fan of Finlay
+ Shingo Takagi vs KENTA (New Japan Cup 2021 Quarter Final Match): hot damn this was great. Shingo brings out the best in anybody who is willing to get hit by a truck, and KENTA fits that billing perfectly. KENTA was likewise able to throw his kicks like crazy, and it made for a physical match that really was the main event it was hyped up to be, in this first ever meeting between the two in a singles match 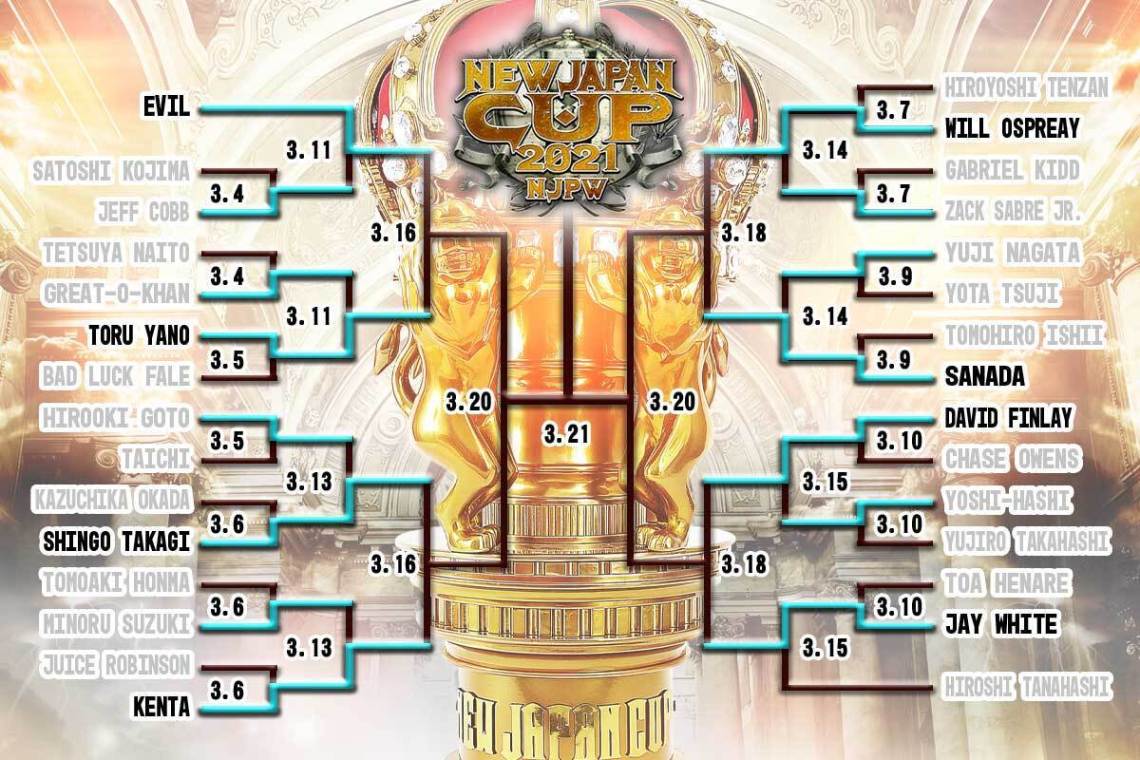 – Toru Yano vs EVIL (New Japan Cup 2021 Quarter Final Match): this was not a good or even exciting match, but the ending has some huge implications for NJPW as a whole

Should you watch this event: Eight men is whittled down to four including two absolute bangers, in Shingo/KENTA and Finlay/White. If you are particularly high on SANADA/Ospreay you may get more out of it than I did, but don’t bother with Yano/EVIL no matter what.