New Japan Pro Wrestling’s (NJPW) annual heavyweight tournament has reached its finale, as the winners of the A Block and B Block go head to head, with the victor not only becoming the winner of the annual G1 Climax 28 tournament, but also receiving a shot against the IWGP Heavyweight Champion, currently Kenny Omega, at the Tokyo Dome on January 4th. Hiroshi Tanahashi edged out Kazuchika Okada and Switchblade Jay White to win the A Block, while Kota Ibushi claimed victory in t he B Block over nearest competitors Kenny Omega and Tetsuya Naito. Tanahashi and Ibushi will now go one on one, with no time limit, to determine the winner of the G1 Climax 28. Reigning IWGP Heavyweight Champion Kenny Omega, former champion Kazuchika Okada, G1 CLimac runners ups Tetsuya Naito, Swithcblade Jay White and various other members of the Bullet Club, Los Ingobernables de Japon, Suzuki-gun and Taguchi Japan are all also in action on the final night of the G1 Climax 28. 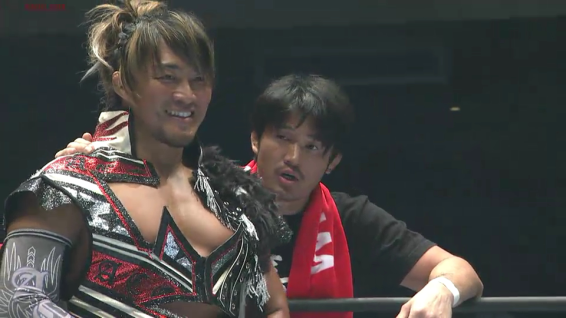 Kota Ibushi, with the IWGP Heavyweight Champion Kenny Omega in his corner

+ Hiroshi Tanahashi (w/ Katsuyori Shibata) vs Kota Ibushi (w/ Kenny Omega) (G1 Climax 28 Final): I really wasn’t feeling this match, especially after everything Ishii, Naito and Omega had done in the tournament, but then Tanahashi “woke Ibushi up” with a slap, and the match went into absolute overdrive. The strikes from Ibushi were blistering, and that double knee moonsault thing he’s done recently was insane. Tanahashi really looked good after I was not high on him at all in the first half or so of his tournament, and this eventually became one of the best matches of the tournament
+ Prowrestler Sengokuenbu, KUSHIDA & Rey Mysterio Jr. vs CHAOS (SHO, YOH & Kazuchika Okada): that first listed trio is quite the star-studded lineup, even if Sengokuenbu did looks strangely familiar. The crowd pop for Mysterio versus Okada may rival that of anything else this year, and the flashbacks to the SHO/KUSHIDA battle in the BOSJ this year was fantastic. This was a lot of fun, but frankly, even with Mysterio, I don’t like that Okada went on after Omega
+ Bullet Club Elite (Chase Owens, Yujiro Takahashi & Kenny Omega) vs CHAOS (Jay White, Toru Yano & Tomohiro Ishii): this was fantastic. White works best when he is at odds with the only people that care about him (ie. other CHAOS members), and Owens in particular looked really good here. Any more Ishii/Omega interactions are fine by me, and thankfully, that does seem to be the plan going forward after that phenomenal G1 match
+ Suzuki-gun (Yoshinobu Kanemaru, El Desperado, Zack Sabre Jr. & Minoru Suzuki) vs Los Ingobernables de Japon (BUSHI, EVIL, SANADA & Tetsuya Naito): this was fine, as you would expect with such good wrestlers in the ring, but it did come across a little bit filler. It is clear there is a plan for a longer story here, but it mostly seems as if it will revolve around Naito/Suzuki. It is clear that the heavys are tired, so it was nice to see my boys Despy and BUSHI getting some more time to shine (not to mention I had forgotten who the Junior Tag champs even were)
+ Bullet Club Elite (Matt Jackson, Nick Jackson & Marty Scurll) vs Bullet Club Firing Squad (Tama Tonga, Tonga Loa & Taiji Ishimori): if the Bucks are going to be facing GoD in the heavyweight tag team division, then I can really get behind Scurll/Ishimori going twenty minutes. There were pre- and post-match shenanigans to make this more of a long term story, and frankly it surprised me in a good way. Gosh Ishimori is good
+ Bullet Club Elite (Cody & Hangman Page) vs Juice Robinson & David Finlay: I really enjoyed this match, but it felt a bit too short, especially considering the way the post-match went. Finlay it at his best when he is teaming with Juice, and Cody and Hangman worked really well together. I was surprised at how much the crowd didn’t hate Cody, since he is usually booed out of the building; I guess his alignment with Kenny has improved his standing 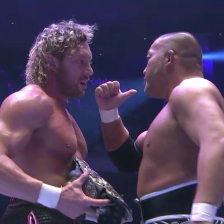 Omega vs Ibushi is going to be FANTASTIC

Who is this fine-ass Prowrestler? 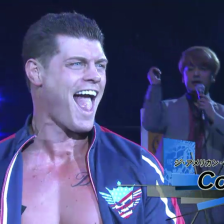 Cody, making his return to NJPW

The Firing Squad gets a new Solder

– Suzuki-gun (Taichi & Takashi Iizuka) vs CHAOS (YOSHI-HASHI & Hirooki Goto): is it weird that I’ve kind of missed Taichi? Goto and Taichi both looked good here, but if anything it cemented that Taichi should have replaced YOSHI-HASHI in the G1 this year. The aftermath was a little bit interesting, but the match itself was nothing special
– Toa Henare vs Bad Luck Fale: this was a two minute squash, and I feel like I must have missed something coming into this
– Yuji Nagata, Shota Umino & Ayato Yoshida vs Tomoaki Honma, Togi Makabe & Mike Elgin: I still can’t believe that Honma is back. Yoshida looked really impressive for his experience level, and Umino still looks great as ever, but this was still just a standard opening tag match

> Ishimori joining the Firing Squad has made me realise I never uploaded my review for Impact Slammiversary, which has was in one of the best matches. I should get on that.
> this did in fact take place before the ALL IN show I reviewed recently, so it was interesting to see a few set ups here, in terms of new moves, or Okada back in his Rainmaker persona

Should you watch this event: Absolutely. While the first few matches fell a bit short, or were otherwise unremarkable, once the show kicked into second gear, approximately in the BCE/Firing Squad match, this turned into a must see affair. Skip the firs three, go out of your way to watch the final three, and seek the three in the middle if you’re a fan.