New Japan Pro Wrestling’s (NJPW) annual heavyweight tournament begins, where for the next few weeks, two blocks of ten competitors will compete in a round-robin format in the G1 Climax 28. The two winners – one from the A Block, and one from the B Block – will then face off in the final, with the winner receiving the main event title match at the annual January 4th show, Wrestle Kingdom. The A Block competitors once again take the ring for Day 7, including the big Bad Luck Fale, who has been disqualified in two of his three matches so far, YOSHI-HASHI, who is still searching for a win, former champion Kazuchika Okada, eternal Ace of the Universe, Hiroshi Tanahashi and the Switchblade Jay White, among many more.

+ Minoru Suzuki vs Jay White (G1 Climax A Block Match): this may have been the only match where Suzuki was the de facto babyface, just because Switchblade is such a god almighty asshole. Suzuki is twice the age of his opponent, so to say it is a battle of youth vs experience is the understatement of the decade, but damn if it wasn’t a little bit cathartic to see Switchblade get stretched. I am a huge Suzuki fan, and White, for the most part, has had a really good tournament so far, and this match ticked all the boxes for me, though it is hardly going to be a tournament classic
+ YOSHI-HASHI vs Mike Elgin (G1 Climax A Block Match): this was a star making performance for YOSHI-HASHI. Elgin’s unreal power was again on display, but gee his thigh slaps are so obvious – he raises his arms like a metre from his legs before the slap. YOSHI-HASHI finally was equal parts of a great match, after that disappointing affair with Suzuki two nights ago 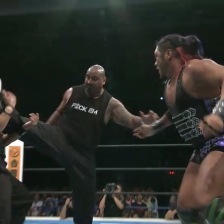 Bad Luck Fale tries to get his leg free from the referee, as EVIL loads up a superkick

Jay White begs off in the ropes from Minoru Suzuki

Togi Makabe asks Kazuchika Okada to give him more

– Kazuchika Okada vs Togi Makabe (G1 Climax A Block Match): this was fine, but that’s about as far as I can go. Makabe just doesn’t feel like the start NJPW puts him forward as (not to take anything away from his accomplishments, mind you – it’s sort of the same with Nagata, Tenzan and the like). Whatever Okada is doing these days is not helping him, in my eyes, because while he was always more than just his jacket or entrance pyro, this weird mid-life crisis thing he is doing just makes me not want to watch him. I dunno, this was just fine
– Hangman Page vs Hiroshi Tanahashi (G1 Climax A Block Match): I can say it now, honestly: I have been far too harsh on Hangman in the past, because he was great here. Surely I don’t need to rewrite my thoughts on Tanahashi again. This was good, but never kicked into the next gear I was hoping it would, and though the winner is neither here nor there, I can’t say it was a particularly thrilling ending
– Bad Luck Fale vs EVIL (G1 Climax A Block Match): I’m sad to say that this really didn’t do it for me. The same shenanigans you’d expect from all the Fale matches so far were nothing new or exciting, and EVIL never got a chance to show off the power he showed in that great match with Makabe two nights ago. This was disappointing in many ways

Should you watch this event: Day 7, one full week of G1 Climac matches, have come and gone, so I have to say that almost all of the matches most worth watching have been from the B Block. I am still interested in Page, EVIL, whatever they are doing with YOSHI-HASHI and of course Minoru Suzuki and Jay White, but every A Block show just feels that much harder to sit through. There was nothing her you can’t just read about and feel like you’ve seen it already.