The ultimate battle of the Marvel Cinematic Universe (MCU) is here, in 2018’s superhero action film, Avengers: Infinity War. Directed by Anthony and Joe Russo (Captain America: Winter Soldier and Captain America: Civil War), the film sees all of the current Marvel superheros, including Iron Man (Robert Downey Jr.), Steve Rogers, the former Captain America (Chris Evans), Thor (Chris Hemsworth),Loki (Tom Hiddleston), Bruce Banner (Mark Ruffalo), Black Widow (Scarlett Johansson), Black Panther (Chadwick Boseman) and Star Lord and Gamora (Chris Pratt and Zoe Saldana, respectively) of the Guardians of the Galaxy, contend with a new threat: Thanos (Josh Brolin). Thanos is seeking out the six Infinity Stones – Power, Time, Reality, Space, Mind and Soul – with the help of his devoted warriors, the Children of Thanos, and if he obtains all six he will be completely unstoppable in destroying half the life in the universe.

The cast is huge, and don’t take my listing of some over others as meaning anything significant. Check out the Wikipedia cast list here if you need to know more (just don’t go to the plot section!).

+ Thanos (Brolin) is equal parts tragic and sympathetic, and downright terrifying. After spending essentially 18 movies building up to this appearance, there was lots of room for error, but to say they nailed his persona is an understatement. He was perhaps more sympathetic than I expected, but the best villains in movies are the ones with noble goals, although their methods may leave much to be desired. From a technical standpoint, the CGI of the Titanic figure was great, with only one or two awkward moments that I saw
+ with such a huge cast, it was seemingly inevitable that some characters would be reduced to cameos, but happily that is not the case. Of course some characters get less time than others, but every character has clear motivations, and is part of a small team which itself is part of a grander scheme
+ certain new interactions in particular are the best way to make sure characters do not go stale. The first meetings between characters such as Tony Stark and Doctor Strange, or Thor and the Guardians of the Galaxy (both already revealed in trailers!) are wonderful. The MCU ha always been bigger than one city, country, continent and/or planet, but it now really feels that every movie was connected in a different sort of way
+ the action is wild and intense, but never bogged down in CGI like, say, Transformers. Despite the heavy effect use, it is always clear who is hitting who, and most characters having human faces (if not wearing masks of some kind) adds some real weight to their battles
+ there are a handful of jokes, but once things get serious, the time for joking is clearly over, even for the least serious of heroes. After Age of Ultron was essentially ruined by Ultron’s constant wise-cracking, this was a terrifying reminder that not all villains in the MCU are there to just be fodder to the heroes 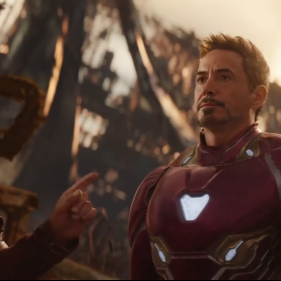 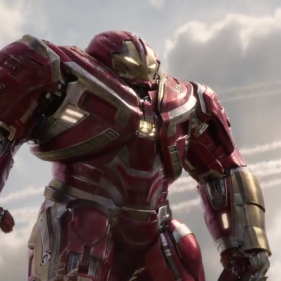 The new and improved Hulkbuster armour 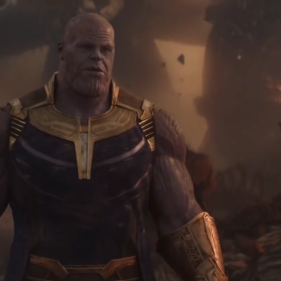 – Thanos’ Children of Thanos (aka the Black Order in the comics) were slightly disappointing. Ebony Maw (Tom Vaughan-Lawlor) was particularly interesting as the Mad Titan’s torturer, but was not overly mportant after his debut scene, and Cull Obsidian (Terry Notary) was relegated to a mindless powerhouse. Just seeing these two, along with Proxima Midnight (Carrie Coon) and Corvus Glaive (Michael James Shaw) was cool, but I do wish they were treated like more of a threat
– it has been noted throughout the marketing and trailer released that Hawkeye and Ant-Man are nowhere to be seen, and unfortunately that is not a ruse: they are just hand-waved out of play, which was disappointing. I also didn’t see Valkyrie anywhere, nor hear her mentioned, which was a bit weird.

> I am entirely down to watch a full movie of Black Widow (Johansson) and Okoya (Danai Guriga) just kicking ass. Throw in Mantis, Gamora, Nebula and/or Scarlet Witch and we could get a full Shevengers movie

Should you see this film: If you are a fan of even one of these Marvel superheros, then absolutely yes, go and see this on a big screen with loud sound. This felt equally like the first Avengers movie, surpassing all of my expectations, and an entirely new film. This was exciting, heartbreaking and really makes you think, and after being built up for at least six years now, Thanos (the character and the meta-concept of the villain) delivered in every way he could have.