Four of iMPACT Wrestling’s top championships will be on the line, as it presents Redemption, in conjunction with Lucha Underground, after the incredible success both promotions had at Wrestlecon. Austin Aries will defend his iMPACT World Championship in a rematch of the main event from the Wrestlecon show, a triple threat match against the real life brothers of Fenix (aka Rey Fenix) and Pentagon Jr. (aka Penta El Zero M). Allie will defend the iMPACT Women’s Championship against The Undead Bride, Su Yung, while Yung will have Braxton Sutter, the ex-boyfriend of defending champ Allie, in her corner. The tag team championships are on the line as well, as Ortiz and Santana, LAX, take on the unlikely duo of Eli Drake and Scott Steiner. The iMPACT X-Division and Knockouts Championships are on the line as well, as champions Matt Sydal and Allie defend against Petey Williams and Su Yung in their respective title matches, and a special Lucha Underground showcase will see Drago face off against the Man from the Cosmos, Aerostar.

+ Austin Aries (c) vs Fenix vs Pentagon Jr. (iMPACT World Championship): the Wrestlecon match seemed thrown together on the fly thanks to El Patron being the POS he is, but this match was great. Fenix’s high flying, Penta’s brawling and Aries technical wizardry were all incredible, but all three guys used all of those styles perfectly. This was a really, really good match
+ Allie (c) vs Su Yung (w/ Braxton Sutter) (iMPACT Knockouts Championship): I love Allie, she is so pure and innocent, and it is that huge contrast with the ‘Undead Bride’ Su Yung that makes pro wrestling so much fun. I really enjoyed this, especially with the addition of Sutter on the outside
+ oVe (Dave Crist, Jake Crist & Sami Callihan) vs Tommy Dreamer, Moose & Eddie Edwards (House of Hardcore Match): this certainly was hardcore. Tables, chairs, trash cans and thumb tacks, were just some of the toys these six men used to main each other. The focal point was still Edwards/Callihan, with the now infamous baseball bat making several appearances. The match itself was just the beginning, with so much story coming after the match had finished. The fans were rabid, like the ECW mutants of old, and I really enjoyed watching this from start to finish and beyond
+ Taiji Ishimori vs Dezmond Xavier vs El Hijo del Fantasma vs Brian Cage vs DJZ vs Trevor Lee (Lucha Rules 6-Man Match): this was incredible. God damn, the action was fast and furious for it’s entire run time, and everybody looked really good coming out of it. Fantasma (aka King Cuerno) may be one of the most underrated wrestlers around at the moment, but the power of Lee and Cage (Cage had a small botch, in the same place as Aerostar, earlier), the technical skills of Ishimori and the high flying of the rest made for a fantastic sprint of a match
+ LAX (Ortiz & Santana) (c) vs Eli Drake & Scott Steiner (iMPACT World Tag Team Championships): after all of his less-than-stellar appearances at Wrestlecon, I was not expecting much out of Steiner, but damn if he wasn’t on fire here. The crowd really hated Steiner, but it just made them care so much more for LAX. This was a good match, but nothing particularly special
+ Drago vs Aerostar (Lucha Underground Showcase): it was a bit jarring to see Drago versus Aerostar in a well lit ring with English commentary, but I got over it because this was still a good match. A pretty ugly botch towards the ending was covered as best as possible, but it did put a small damper on the match and the crowd. This was still good, though, especially as an opening contest 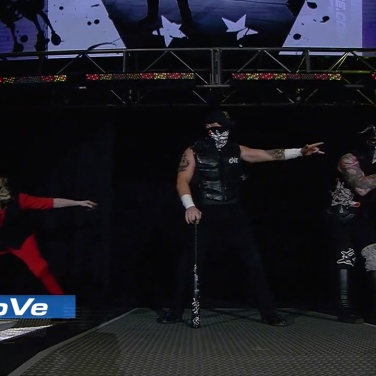 oVe – Ohio. Versus. Everything.

Drago (yes, that black thing is his tongue) 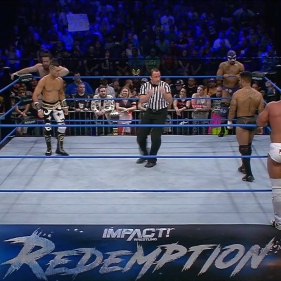 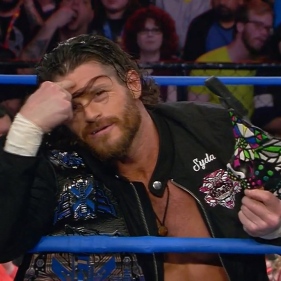 – Matt Sydal (c) vs Petey Williams (iMPACT X-Division Championship): I am sad to say I was disappointed with this match. I was a big fan of Williams back in the day, especially when he was teaming with Scott Steiner, but this match never felt like the X-Division of old. Sydal is on one of the best runs of his life, but even he didn’t quite click for me. I expected more from these two
– Taya Valkyrie vs Kiera Hogan: gosh, this was bad. A special guest commentator was seemingly more important than the match, but neither the talking or the fighting was anything worth consuming

>I still don’t entirely understand the Lucha Underground characters, specifically Pentagon Jr. Penta should be going by the name Pentagon Dark, and he is the current Lucha Underground Champion, not a former, according to Josh Matthews (unless that has changed at recent tapings, but I don’t want to know any spoilers at all).

Should you watch this event: The title of this show might prove prophetic in the coming weeks, because this was a Redemption for TNA/GFW/iMPACT Wrestling as a whole. The show has been getting better steadily for a long time now, and if this event is anything to go by, then not just this show deserves your attention, but the promotion as a whole.