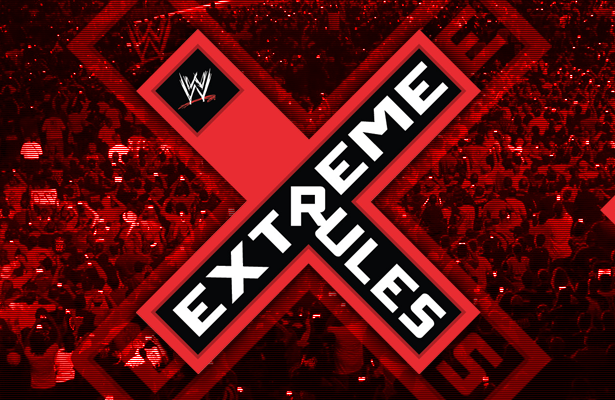 When the WWE rolls into the Prudential Center in Newark, New Jersey, things are going to get extreme. There will be no count-outs, no disqualifications and no match restarts when AJ Styles once against challenged The Juggernaut, Roman Reigns, for the WWE World Heavyweight Championship in a match custom made for this event: Extreme Rules. Even though interference will be legal, what condition will Karl Anderson, Luke Gallows and the Usos be after they have to compete in a tornado tag team match? And when Dean Ambrose and Chris Jericho are locked inside a steel cage full of weapons, will either man be able to leave The Asylum on their own two feet? With every title on the line in one night – a night where anything goes – what will happen when the WWE goes extreme?

+ The Miz (c) (w/ Maryse) vs Kevin Owens vs Cesaro vs Sami Zayn (Intercontinental Championship): an early contender for match of the year, without a daoubt; this was simply incredible. Every one involved looks like a million bucks, and it was never once clear who would win. In my opinion, the best person won, too. Fantastic match, fantastic story, and I can’t wait to see more of this
+ Kalisto (c) vs Rusev (w/ Lana) (United States Championship): Rusev and Kalisto meshed really well, and the fact both are somehwat quick, combined with Rusev’s power and Kalisto flashy offense made for a very entertaining match
+ The New Day (Big E & Xavier Woods) (w/ Kofi Kingston) (c) vs The Vaudvillains (Aiden English & Simon Gotch): The Vaudevillains have such a fantastic gimmick, but perhaps not the best in ring just yet. This was a surprisingly short match, but still enjoyable
+ Dolph Ziggler vs Baron Corbin (No Disqualification Match): this was on the pre-show, and thought it was short is was surprisingly good. Corbin is still improving, but Ziggler is good enough to always make Corbin’s offense look deadly

– The Usos vs The Club (Karl Anderson & Luke ‘D.O.C.’ Gallows) (Tornado Tag Team Match): as the opener, this was not horrible, but after having seen these four face off so many times over the past few weeks it is hard to think of anything I had not seen before. It boggles my mind that the WWE would bring in Gallows and Anderson and throw them directly into the same match, week after week, and then expect the PPV match to be anything other than the same
– Dean Ambrose vs Chris Jericho (Asylum Match): it pains me to say it, but this was a very boring match. The cage was more a hindrance than anything, and the constant teases of hardcore weapons int he WWE’s PG environment is more frustrating than anything. Sometimes even two good wrestlers just don’t click, and this was one of those situations
– Charlotte (c) vs Natalya (Submission Match) (Women’s Championship): probably the weakest of their matches so far. The submission stipulation doesn’t mean much when both women use submissions as finishers anyway. A stupid ending spot completley killed what was already a dying match

> Roman Reigns (c) vs AJ Styles (Extreme Rules Match) (WWE World Heavyweight Championship): for all intents and purposes, this was a very good match. But there was very little about it that would be considered extreme. With moves and interferences we have seen literally every week since the CLub debuted, there was nothing special about this match at all
> the pre-show segment with Lana and Rusev was amazing. They played off each other, and host Tom Phillips, so well, and came across as such despicable people. It was wonderful

Should you watch this event: Go out of your way to watch the Intercontinental Championship four-way. As for the other matches, if there was any indication that the WWE, in this PG era, needs to scrap the Extreme Rules PPV, then this was it. Aside from the cage match, this was basically just another episode of Raw.