Live from College Park Center in Arlington, Texas, Ring of Honor (ROH) presents Final Battle, as champions look to close out the year with another successful defence, while the challengers want to kick off the new year with a huge bang. In the main event, “The Ocho”, Chris Jericho will defend the ROH World Championship againt the man he defeated for the gold at Dynamite Grand Slam in September, Claudio Castagnoli. Jericho and Castagnoli’s teammates in the Blackpool Combat Club have been at each other’s throats for months now, and Jericho has given Castagnoli this title shot on one condition: when Jericho wins, Claudio must join the Jericho Appreciation Society and leave the Blackpool Combat Club. Tonight also sees the third and most certainly final match in the trilogy between the ROH World Tag Team Champions FTR and The Briscoes, this time in a rare and incredibly dangerous Double Dog Collar match. Each competitor will be chained by the neck to a member of the opposite team, and whichever team can not just win the match, but survive the match, will be crowned the tag team champions of Ring of Honor wrestling. In the ROH Women’s division, Mercedes Martinez will defend her gold against the new attitude of Athena. The history between Mercedes Martinez and Athena runs deep, going all the way back to the SHIMMER promotion in Japan, and the two will meet one more time at Final Battle with the ROH Women’s Championship on the line.

Meanwhile, Daniel Garcia and Wheeler Yuta look to finally put their storied rivalry to an end. The score for each man against each other stands at 1-1-1, and with Garcia’s Pure Championship on the line, there is no better way to finish off an incredible series. Also, Dalton Castle and The Boys face a mammoth task as their 6-Man Championships are on the line against Brian Cage and the Gates of Agony, and former friends collide as Keith Lee returns to Ring of Honor almost six years to the day that he walked out on his then partner, Shane Taylor. Tonight, Lee will team with his best frenemy, Swerve Strickland against former championship contention ally, Shane Taylor and Taylor’s new partner, JD Griffey. Kicking things off on the main show, Blake Christian & AR Fox team up to battle the luchador brothers of Rush and Dralistico, in Dralistico and Fox’s ROH debuts.

Finally, the Zero Hour pre show for the event sees its own share of action, including Mascara Dorada battling The United Empire’s Jeff Cobb, in Dorada’s ROH debut; Willow Nightingale facing off with Trish Adora; Dante and Darius Martin of Top Flight teaming up to face Matt Taven and Mike Bennett of The Kingdom, and; Matt Menard and Angelo Parker — or rather Daddy Magic and Cool Hand Ange — will battle Eli Isom and Cheeseburger in tag team action. 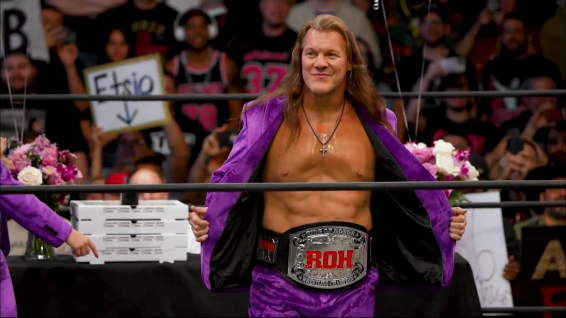 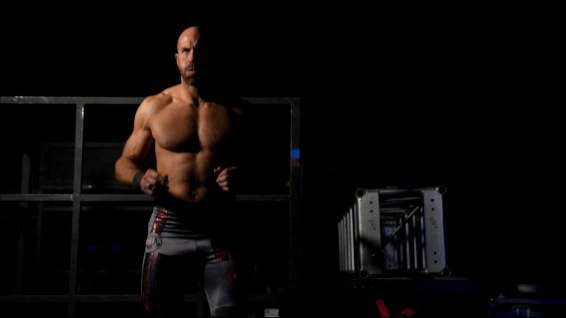 Claudio Castagnoli, the challenger for the ROH World Title

+ Chris Jericho (c) vs Claudio Castagnoli (ROH World Championship) (If Castagnoli loses, he must join the Jericho Appreciation Society): obviously this match was good, because I don’t think any match with CLaudio could not be. That said, even this struggled to follow the tag match before it. The ending was probably the most surprising part of the match, but everything both men did was technically proficient and the crowd was well into it
+ FTR (Dax Hardwood & Cash Wheeler) (c) vs The Briscoes (Mark Briscoe & Jay Briscoe) (Double Dog Collar Match for the ROH World Tag Team Championships): this was amazing. The broadcast used a fun split screen to try and keep track of all the action, which was very welcome as all four guys were doing violent things to their opponents. It was when one competitor yelled “fucking murder him” to their partner that I knew this was something special. We knew this would be bloody, but even I wasn’t quite prepared for what we got. It’s a shame the Briscoes can’t appear on AEW TV properly, because a few vignettes could have really made this a contender for ‘All Time Great’
+ Daniel Garcia (c) vs Wheeler Yuta (Pure Rules Match for the ROH Pure Championship): I’ll be straight-up and make it clear that I am not a fan of the Pure Rules matches, and I am well and truly sick of these two interacting (as well as the JAS and BCC in general). That said, this felt as if that was common knowledge, so they did their thing relatively short and sweet, with a definitive ending that I think does actually signal the ending of this feud
+ Swerve in Our Glory (Swerve Strickland & Keith Lee) vs Shane Taylor Promotions (Shane Taylor & JD Griffey): this was a hell of a match, though it had the ending that I personally hate to see. I cannot stress how good Swerve is, and while I think Lee has lost a step in the recent year or so, he’s still very good. Shane Taylor is one of those guys that you don’t really think of as being great until you see him in a match like this, and while I’m not overly familiar with Griffey, I was impressed with him as well. This was a lot of fun
+ Mercedes Martinez (c) vs Athena (ROH Women’s World Championship): this is all the proof you need about what what women can do when they are both experienced, and given some time to work properly. These two veterans knew exactly what they were doing, and even managed to flip their alignments as the crowd’s preference for the villainous Athena over the defending champion became apparent. I’ve often though Martinez was overlooked in the importance of women’s wrestling, and this title reign, though derailed a bit by injury, has proven that. I am also glad Athena is allowed to just do more, as the Ember Moon character often hampered her skills
+ La Faccion Ingobernable (Rush & Dralistico) (w/ Preston Vance & Jose The Assistant) vs Blake Christian & AR Fox: this was going pretty well until the ending, where I am pretty sure the referee counted a pin that was clearly meant to be a kickout. I am a huge fan of Rush, and I am also glad that AR Fox is getting some time to shine, but I could take or leace the other two guys. However, as with all the non-title matches on this show, I didn’t understand why this one was here
+ The Kingdom (Matt Taven & Mike Bennett) (w/ Maria Kanellis-Bennett) vs Top Flight (Dante Martin & Darius Martin): this was pretty much solely to get the crowd hyped up at the top of the Zero Hour show, and in that regard it worked. Both of Top Flight are just so mind blowing to watch and that contrasted really well with the old school sort of bad guy stuff The Kingdom does. There was one very noticeable but ultimately unimportant botch from Dante, leading to a spectacular finish
+ Mascara Dorada vs Jeff Cobb: this simple ‘strength verse high flying’ match would be even better with a story behind it, but for the few minutes it went it was really good 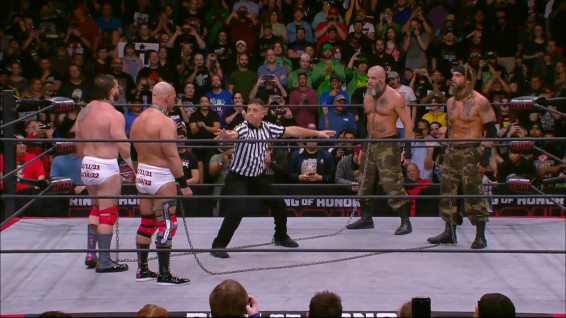 Photos taken moments before disaster… FTR versus the Briscoes. 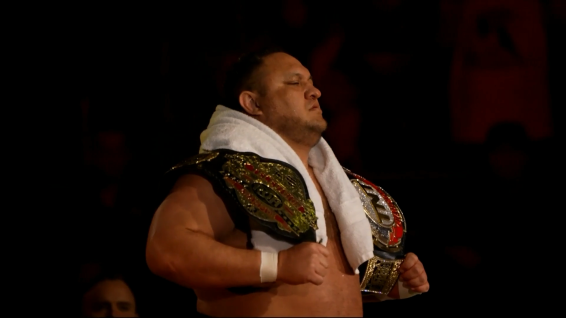 “The King of Television” Samoa Joe 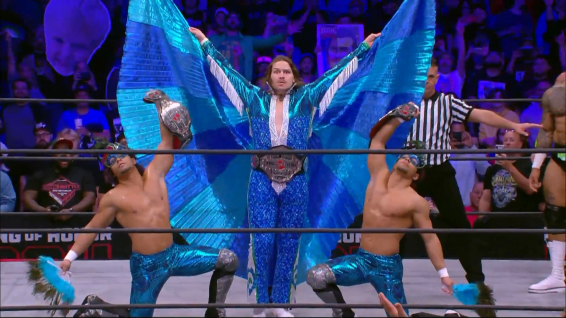 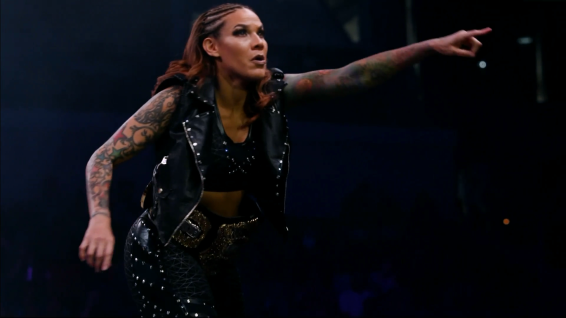 – Samoa Joe (c) vs Juice Robison (ROH Television Championship): this was technically fine, but it just lacked that something that I need to make it a standout match. I’ve long said that Juice is an underrated ‘meat match’ guy, especially because he just doesn’t look like he belongs in that group, but the way he and Joe traded chops was impressive to see and hear. As with most other title matches, I’d really have liked these two to have interacted a bit more in the build up, because it just felt like someone going ‘hey that could be a fun match to watch, let’s work out the story later’. I do also admit it struggled to follow the Dog Collar tag match
– Dalton Castle & The Boys (c) vs The Embassy (Toa Liona, Kaun & Brian Cage) (w/ Prince Nana) (ROH 6-Man Tag Team Championships): my biggest take away from this match is that however good you think Dalton Castle is, you are underrating him. Even with the much reported back injuries through these latter stages of his career, he is still so fantastic as a wrestler, performer and a character. I like the mean guy trio on the other side, and I think Kaun might be creeping his way up my list of overlooked guys, too. Brian Cage is always going to do what Brain Cage does, and overall this felt thrown together
– Trish Adora vs Willow Nightingale: I’m such a huge fan of Willow Nightingale. I truly believe she could be the top women’s wrestler in any company around right now. I’m always glad to see her wrestle, but I admit I would like her to be in a more prominent spot
– The Jericho Appreciation Society (Daddy Magic & Cool Hand) vs Shinobi Shadow Squad (Eli Isom & Cheeseburger): these fans love them some Cheeseburger, but I love me some Daddy Magic. I just can’t take my eyes off of “Daddy Magic” Matt Menard when he’s in the ring, and his nickname may be the best in wrestling right now. This was a very good but very basic match, albeit with a bit more comedy than the other matches on the show. It’s listed as a negative simply becuase I don’t think it really accomplished anything, but trult nothing Daddy Magic does is ever a negative

Should you watch this event: I stress that even the matches listed as negatives above are well worth watching, which overall made for a fun and easy show to watch. My only complaint is simply how many matches there were that didn’t need to happen, and that I personally would have finished with the Dog Collar match, thought I understand why they didn’t.