Developed by Coin Crew Games, and published by iam8bit and Skybound Games, Escape Academy is a a 2022 puzzle/escape room video game. Tied together by a relatively loose story, players must advance between self-contained rooms, collecting clues to solve riddles or combination locks in order to complete each mission at the titular Escape Academy.

[Please note: I played through the entire game to completion in split-screen multiplayer. I tested single player after the fact to see what it was like.]

+ each mission/chapter perfectly replicates a full escape room experience. This game is one of the more involved “escape room games”, and instead of simply being a point and click game players must control a character in first person to move around the environemnt and inspect objects. Players can pick up and trade certain items with their co-op partner where available, adding some true team work requirements
+ the entire game can be played in local, split-screen multiplayer and the feeling of working together to solve puzzles is very satisfying. When one player has a note that hints at a sequence of movements, or how to mix chemicals, they can hold it up for the other to see as they do the task, exactly like a real life puzzle
+ by virtue of being an escape room, every mission has a strict time limit which means you can always plan how long you want to spend playing. It was refreshing not to have to leave a puzzle half finished and come back to it later
+ there is a colourblind mode option, which I appreciated immensely (there have been numerous real life escape room puzzles I was no help with as they were colour related). All it did here was write the name of the colour underneath the object/section being described, which was all I needed 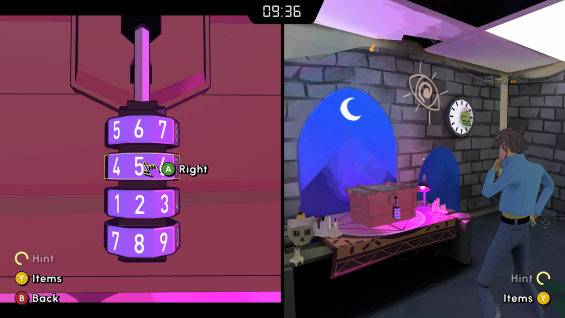 Player 1 (left) inspects a combination lock, while Player 2 is free to move around the room, but can still see Player 1.

Our intrepid Escape Academy-ists…. I don’t think that’s a word.

– the game mentions that it will help to have a pen and paper handy, and I think that is an absolute necessity in single player mode. I tested out some early puzzles in single player, and knowing how things end up, I can say it would incredibly frustrating running back and forth between clues if you had written them down wrong on your real life paper pad
– I do considering myself ang my co-op partner seasoned escape room players in the real world, and to that end there was nothing in this game that stumped us for more than a minute. Make of that what you will

> the story connecting it all is neither a positive or a negative overall, taking the form of a visual novel more than anything. I appreciate that there was some effort to link the ‘rooms’ together, but it was hardly a game making addition
> seemingly the case with every puzzle game I play, there was one lone puzzle in this whole game which still doesn’t make sense to me. My partner and I solved it through brute force trial and error

Should you play this game: If there is one thing I like more than a puzzle game, it’s a puzzle game with dedicated local co-op gameplay. If you like puzzle games and have someone you can stand to attempt some virtual escape rooms with, then this is a can’t miss game. You might still get some joy out of a single player experience, but it’s clear that this is meant to test your team work skills along with some good old fashioned brain power.