New Japan Pro Wrestling (NJPW) presents the G1 Climax 32, this year featuring 28 competitors across four blocks of seven. Each competitor in the four blocks will face all the others in their block once, with points being determined in the following ways: any win is worth 2 points; any loss is worth 0 points; a tie with no clear winner (such as a 30 minute time limit draw) is worth 1 point each. The overall point leaders at the end of the the tournament enter a 4-way elimination play off, with the final winner earning the main event championship match at Wrestle Kingdom.

[Please note: to save myself some time, I will only review the tournament matches themselves. If there is a particularly interesting preliminary match up, I’ll tell you about it. You can catch up with all previous days of action here.]

As the field of viable competitors in the G1 Climax 32 begins to thin, the main event of night 15 is incredibly interesting, when Hiroshi Tanahashi faces off with Hirooki Goto. Hirooki Goto has not defeated Tanahashi in singles competition in several years, but he will have to do so in this match if he wishes to keep his G1 Climax win alive. Both Tanahashi and Goto previously defeated Tetsuya Naito, so the tie breaker between these two is imperative to success. In the semi main event, one of my most anticipated matches, Filthy Tom Lawlor will face off with Kazuchika Okada in a must-win bout for the leader of Team Filthy. It is the first time these two have faced off, and arguably the biggest match of Lawlor’s career, but Okada is certainly not intending to lose two matches in a row. Zack Sabre Jr and EVIL are also set to square off in C Block action which EVIL must win to stay alive, while fresh off a mental and physical battle with Taichi, Tama Tonga is the latest to have back-to-back matches, as he faces Great-O-Khan in B Block action. With O-Khan already eliminated, he will be looking to play spoiler to Tama’s chances in the first ever singles meeting between the two. El Phantasmo and David Finlay are both still mathematically alive in the D Block, but El Phantasmo must win to remain so. With the incredibly unlikely chance of a 7-way tie in the D Block still possible, every single win or loss can make or break the whole tournament for those involved. Kevin Kelly will be joined once again by Lance Archer for all tournament action.

Hirooki Goto, who must win to keep his tournament alive. 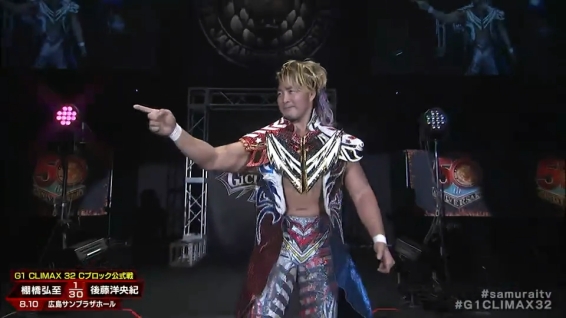 Hiroshi Tanahashi, in a good position to win the C Block.

+ Hirooki Goto vs (G1 Climax 32 C Block Match): holy smokes, this was an absolute war. What started off as a relatively good-but-not-great match soon turned into something much more, including some nearly disastrously near pinfalls and some of my favourite moves making a comeback. The final stretch of this will be one shown in highlight videos for the tournament, and perhaps for the winner’s career in general
+ Kazuchika Okada vs Tom Lawlor (G1 Climax 32 A Block Match): I was absolutely hooked and on the edge of my seat for this entire match, and I never lost that feeling. I make no secret that going in, I really wanted Filthy Tom to win this match, however unlikely that was, and I really think having that personal stake (for lack of a better term) is what makes wrestling so good
+ Zack Sabre Jr. vs EVIL (G1 Climax 32 C Block Match): some early shenanigans were kind of fun, and the fun never stopped. I really like this
+ Tama Tonga vs Great-O-Khan (G1 Climax 32 B Block Match): though the immediate ending was a little bit strange, but I really liked this overall. This was one of the matches where O-Khan matched up well, as he could play both spoiler to Tama’s speed, and by virtue of O-Khan’s strength, reason for Tama’s speed
+ David Finlay vs El Phantasmo (G1 Climax 32 D Block Match): this was fantastic stuff from two certain future major stars, and two guys who have had great tournaments in an in0ring capacity. Finlay has some huge underdog energy with the NJPW crowds, but if there is anybody who the crowd loves to hate, it is El Phantasmo. ELP’s athleticism cannot be understated, and the ease at which he flies and jumps around the ring is just gorgeous

Should you watch this event: This was perhaps one of the best nights of tournament action this year. Goto/Tanahashi knocked it out of the park, Lawlor/Okada had me on the edge of my seat, Sabre/EVIL was great, Tama Tonga/Great-O-Khan were a solid clash of styles, and Finlay/ELP was the greatest underdog versus cheater stuff you’ll see. And all of this is topped off with Lance Archer doing really well on commentary again.