[Please note: to try and save some time, I’m only reviewing the tournament matches themselves for rounds 1 and 2. This is the first two nights of the second round, but I previously reviewed the full first round here and here.]

On the third night of New Japan Pro Wrestling’s (NJPW) annual tournament, three tournament matches will decide who advances in the New Japan Cup, with Taichi receiving a bye into the next round by virtue of an injury to Hiroyoshi Tenzan. In the main event, the “Rainmaker” Kazuchika Okada will face the relatively inexperienced, but rapidly progressing Master Wato. Meanwhile, Hirooki Goto will get his hands on Dick Togo as Goto seeks to win the tournament once more, on the 10 year anniversary of his first victory; and Yoshinobu Kanemaru and CIMA will meet in a battle with decades of experience and dozens of companies’ experience behind them.

Night 4, meanwhile, features four huge tournament contests, including Bad Luck Fale looking to come off his first round bye against a damaged and depleted Hiroshi Tanahashi. Tanahashi was always the favourite against YOH, but took more damage than anyone could have anticipated, and will need to truly be one-in-a-million to defeat the “Rogue General” of the Bullet Club, Bad Luck Fale. Jeff Cobb will attempt to continue to run through the New Japan dads, as he faced Satoshi Kojima; and Tetsuya Naito must deal with the crafty and deceptive Gedo. Finally, YOSHI-HASHI will face the young lion with nothing to lose, Kosei Fujita in Fujita’s biggest match of his young career and first ever New Japan Cup match.

Way to the Grandmaster 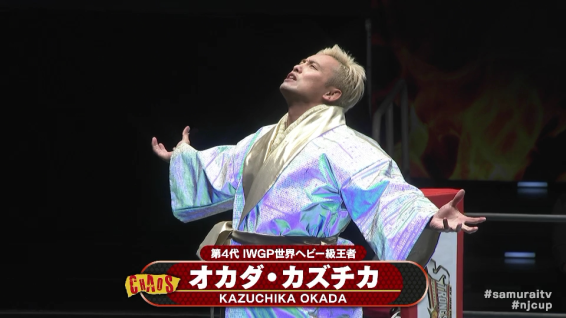 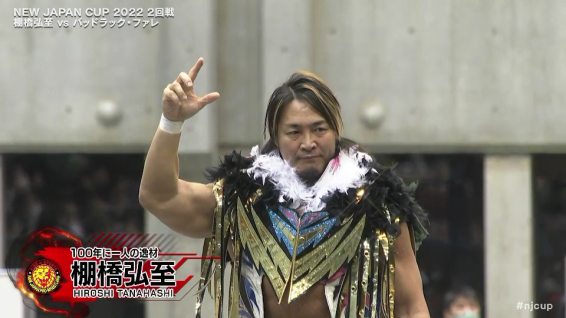 + Jeff Cobb vs Satoshi Kojima (New Japan Cup 2022 Second Round Match): for the first time in a long time, I have thought Kojima looked old. Cobb did as Cobb does, and of course Koji had a few big hits up his sleeve, but this was a Cobb match for the most part. Will Ospreay at ringside added a few fun kinks, especially as the two subtly hinted at an impending confrontation of their own; in a tournament setting only, of course. Without giving away the outcome here, Cobb was a pre-tournament favourite for a reason, and it is monster matches like this
+ YOSHI-HASHI vs Kosei Fujita (New Japan Cup 2022 Second Round Match): Fujita has a huge upside, and YOSHI-HASHI is simply not the same YOSHI-HASHI as he was a few years ago. Therefore, I am still somewhat surprised to say this was a fun match. If any of the young lions were going to lose, YOSHI-HASHI was going to be the perfect fall guy (albeit, a fall guy that is a tag team champion). I liked this
+ Hirooki Goto vs Dick Togo (New Japan Cup 2022 Second Round Match): I’m surprised to say that I enjoyed this a lot more than I expected. This was basically “Goto has to deal with Togo’s bullshit: the match” but there was such varied ways of cheating and dirty tactics that it made things interesting. This also meant that the ending could have come from either guy at any time, and that made this better than the expected sum of its parts

– Hiroshi Tanahashi vs Bad Luck Fale (New Japan Cup 2022 Second Round Match): Fale is such an interesting character in New Japan, because he obviously is big, but never quite big enough to be the Big Show/Kane/Strowman they treat him as. Tanahashi is legendary, but I’ve made no secret that I think his best days are well behind him and it’s matches like this, where he plays such an underdog, that prove that. Maybe I’m just bitter than some of my favourite are out of the tournament already, but this was not very good
– Testuya Naito vs Gedo (New Japan Cup 2022 Second Round Match): this was the poor, boring sort of match that I was expecting Goto/Togo to be before it. Gedo is simply not a credible threat for a full time guy of Naito’s status, even considering Naito’s semi-recent injury and Gedo’s Bullet Club backing. This was a waste of Naito
– Kazuchika Okada vs Master Wato (New Japan Cup 2022 Second Round Match): whether he won or lost the match, this was an absolute burial for Master Wato. The English commentary did not do Wato any favours, nor did his own performance, and worst of all Okada just looked bored and unaffected by all of his offence. There were one or two cool things done by Wato, but overall this was a slow, boring, and overly long match that never once seemed in doubt
– CIMA vs Yoshinobu Kanemaru (New Japan Cup 2022 Second Round Match): I was excited for this on paper, but something about it never clicked for me. The crowd was quiet for much of it, but even as it reached the in-ring peak, I couldn’t help but feel like I was just expecting more

Should you watch this event: There were some good matches here, but as the second round still includes young lions, past-their-prime workers, and ‘managers’ (albeit former wrestlers in their own right) there wasn’t anything bit on display in this first half of the second round. Tournaments always work this way, but the matches determined for round 3 are looking better every moment.