[The following is a guest review from DrXan.]

Developed and published by 10tons (Tesla vs Lovecraft: For Science! & Tesla Force) Dysmantle is an open world adventure game that lets you destroy pretty much everything. Emerging from your bunker after the usual viral apocalypse you find yourself on ‘the island’ with the seemingly simple goal of gathering enough resources to escape.

+ the game’s cartoony art style makes for clear visuals that help distinguish the materials you gain from breaking things down; a wooden fence will give wood, a metal cabinet will give metal and so on
+ the core hook of just smashing things to pieces is super satisfying; entering a house with your crowbar and leaving when only the walls are left standing is never not fun and as you level up and explore you gain access to more and more destructive weapons
+ the game touts its ‘hand crafted map’ as a big selling point and its easy to see why, as environments are varied from sparse deserts to dense towns and cities all with appropriate props and resources to be gathered
+ there’s a surprising variety of features to the game. Beyond simply smashing things, there are systems for hunting, fishing, farming and even a limited sort of tower defence minigame 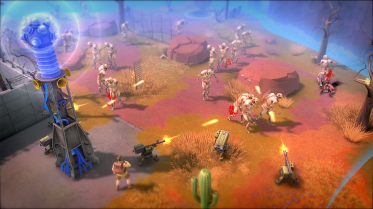 – first and foremost this game does tutorials horribly; outside of the starting area there is almost no guidance about where to get certain materials or how to increase your gathering ‘level’, it was so bad that I learnt I had been missing the use of a tool for hours as it was non-sensical in how it was to be used (more on this below)
– this game is big on style, low on story. It builds a sense of intrigue, with radios playing automatic messages that descend into a kind of madness, only to have there be no real payoff for the story, as it ends with a fizz instead of a bang
– further to the above, this game suffers from what I call ‘The Arkantos Problem’ (named after the unlucky hero of the same name from Age of Mythology) where every simple quest objective has to lead to some larger problem, then another, then another until your objective that seemed reasonable becomes nonsensical by comparison.
– the actual weapons and tools you get in Dysmantle are very samey and usually revolve around ‘hit thing with thing’ as primary weapons and then limited use ranged options such as throwing knives and grenades. The only primary ranged weapon you get later in the game is equally disappointing

> this game lets you add emojis to any on screen text. I don’t know why
> but seriously, if I gave you a crowbar, a machete and a baseball bat which would you use to break concrete??

Should you play this game:  Look, I spent 66 hours on my original playthrough and I kind of don’t know. Dysmantle didn’t grab me enough to be a must play, but the real hook of wrecking things for resources seemed to keep me going for the next upgrade or new tool. I got this game on sale and would recommend it in that way; if you can get it cheap, Dysmantle will fill that destruction shaped hole in your heart you never knew was there.