Developed by Korean studio Action Square Co. LTD, published by SK Telecom, CO. and released as an early access/game preview in late 2021, ANVIL: Vault Breakers is a top down/twin stick shooter with rogue-lite elements. Taking control of a ‘Breaker’ (essentially a remote battle suit) players must clear enemies from across three galaxies as they hunt for Vaults, ancient containers of relics of unimaginable power. There are twelve classes spread across three sub-types, essentially “soldier”, “heavy” and “support” classes, each with their own unique skills. Teams of up to three Breakers can contend with the galactic dangers at one time, which will almost certainly be required to defeat the ultra-tough boss monsters. The game is available on Xbox Game Pass as an early access/game preview, or for purchase in the store.

+ the core gameplay is simple but satisfying. The ‘soldier’ Breakers are easily my personal favourite, playing as classic twin-stick shooters, as they equally balance power and durability. The heavy characters take a bit longer to tweak to how you want to play the game, but can become more powerful than any others. The support characters often act as glass cannons, capable of intense power at the cost of almost no health or armour making for frantic, do-or-die gameplay
+ there are dozens of weapons for each class (the “soldiers” can use various rifles, shotguns, etc; the “heavy” units have melee weapons or flamethrower type armaments, and; the “support” Breakers have various styles of dual-wielded pistols and charging cannons). Choosing the best weapons to match with the best discovered relics can make or break a run early on
+ throughout levels you can find relics to increase your damage, health, armour etc, as well as effects such as a chance to reset skill cooldown or to create a shield around you. Various Breaker abilities or weapons inflict status effects on certain enemies (freezing them, petrifying them, etc) and you can tailor your Breakers to do bonus damage to enemies under those effects. The randomised nature of their relic availability means no two runs are ever identical
+ completing planets/full galaxies gives you even currency to unlock new Breakers, small ‘pet’ robots to aid you in battle, or new colour schemes for your Breakers. It’s allegedly going to be a “season” thing which will reset every few months, but from what I see on Reddit and the Steam Q&As, that is not yet set in stone. I enjoy getting slightly stronger after each run, because it makes the game feel like it’s progressing, even if only slightly

Big bosses mean big trouble for your character, and you, the players, sanity. “Uzi”, with the thicc hips and jiggling breasts that all robots need. 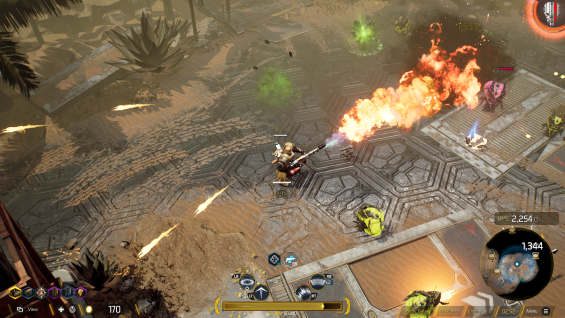 – every certain number of planets completed across the galaxies feature boss battles. These bosses feature intense difficult spikes, huge health pools and often have a one-hit kill attack. I played the brawler class Breaker, “Rush”, with over 150,000 hit points and 90% damage reduction from armour, and I still died in a single attack. One issue might be that, in the example of a laser powering up and hitting you, the damage is applied to your Breaker the moment the laser begins the charging animation, not the point at which it would have hit you. This is the sort of thing that hopefully will be changed sooner than later
– I seem to say this a lot, but why is there no split-screen/single screen couch co-op? The game already supports up to three players (and more than that is planned for future updates) so I don’t understand why it can’t be done. I’m ready to remove this if and when it happens, but I’m not holding my breath
– I’d love to know the in-game reasoning behind the support Breaker suits having breast jiggle physics or cool jackets. Neither of those things seem conducive to combat against non-humanoid aliens

> most of my play time was single player, with multiplayer proving either too easy, too difficult (due to ally stupidity) or fraught with connection issues. This didn’t feel fair to call a negative, because this is still an early access game
> the official website tells me that “ANVIL” is an acronym for “Ancient Vault Investigation Lab”. I don’t know if that was said anywhere in the game
> there are conflicting reports of whether this game is called “Vault Breaker” or “Vault Breakers”, plural. It is written differently in many places, but I have gone with the spelling in the in-game title screen

Should you play this game: I am still having an absolute blast playing this, but I can admit it is starting to wear thin. Most runs devolve into the same strategy, as some weapons are clearly better than others for whichever class you are playing as, and some relics are absolute must-haves, which can make or break a run early on. As this moves onwards out of early access it might be worth purchasing in full, especially if the planned roadmap comes to fruition. As it currently stands you can play it for free on Xbox Game Pass, so why not give it a go?