Developed by Luis Antonio, Twelve Minutes is a top-down, choose your own adventure/mystery game, published by Annapurna Interactive. A man (James McAvoy) returns home from work, where his wife (Daisy Ridley) has prepared a special night for the two of them. Soon, a man claiming to be a cop (Willem Dafoe) enters the apartment, accuses the wife of murder, and strangles the man to death. But suddenly, the man re-awakens as if he had just walked into his apartment, but with all of the knowledge of what to him has already happened, and to the rest of the world is about to take place.

+ the voice acting is all top notch, as you’d expect from three bonafide Hollywood stars. As noted below, because the tone of conversations can change, there are several different versions of each line recorded that play at the correct time. Willem Dafoe is the real standout especially at first when the events are confusing and intense
+ aside from the quality of the animations themselves, the way animations will change or modify based on the tone of the conversation is genuinely quite impressive. The order in which you choose to do things can change following animations, such as interacting with someone when they are mad at you versus happy to see you. Similarly, the huge number of potential conversations that can occur (for example, if you know something versus if you don’t, or whether you want to reveal something to your wife or not) are mind blowing, but all flow seamlessly through the in-game menu
+ from the moment the cop first bursts through your door, I was completely gripped by the story and really felt some pride when I thought of doing something that advanced the story. The story progresses relatively simply, but you’ll have to at least sort of know what you want to find out based on the hints and teases from previous loops. Everything in the apartment is necessary in one way or another, but you’ll maybe need to try a few things before it all clicks 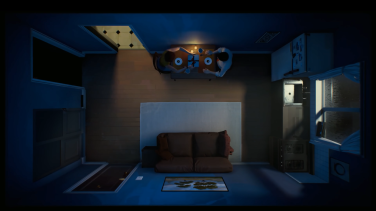 A lovely night in. 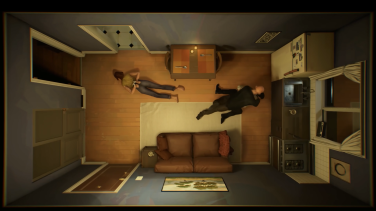 – though understandable given the huge number of variations on possible animations, characters often clip through each other and the environment, and can ‘glide’ across the floor to get into the correct position for certain animations to take place. In a way, they sort of looked like The Sims animations, but that is not meant to sound as harsh as it does
– as much as I loved the original mystery, and especially the way of solving it, I was let down by the ending (or at least what I am considering the ‘true’ ending). Due to the looping nature of the story, some things will becoming clear to the you, the player, before you have the option of bringing it up in-game

> it was kind of hard to get screenshots because they don’t really do justice to the way the game works. I did my best
> this was a day one release on Game Pass, and I played it fine on the Xbox Series X. The game is clearly not made to be played with a controller however, as you’ll ‘click and drag’ items to use them in the game world, so if you have a mouse nearby it will definitely play smoother with that (or just play it on PC)

Should you play this game: I have been eagerly awaiting this from the moment it was announced, and I am happy I played it. I didn’t like the ending of the story, but the internal mechanics of the game must be commended and this is a very easy way to spend a night or two with some friends as you try and solve a mystery.