Ten years after the release of the original game, Need for Speed: Hot Pursuit Remastered is a visually updated re-release for modern hardware. Featuring all of the DLC included with the original release (“Super Sports Pack”, “Lamborghini Untamed”, and “Porsche Unleashed”), players can choose to drive as racers or cops through various environments in enclosed, sprint-style races, time trials and pursuits. I played this original game to pieces back in 2010, and between you and me I am pretty damn good at it.

+ the driving is as satisfying as ever, with drifting the long highway on-ramps in a full circle once against feeling like reaching Nirvana… as long as a poorly placed civilian car doesn’t ruin your run. The choice of choosing a ‘short cut’ must be made on the fly as you quickly calculate your position, whether you are in a pursuit and the car your driving — “Stick to the road in low slung exotics” – and it’s that moment to moment gameplay that will keep you coming back
+ graphically, this was one of the prettiest games at the time of its original release in 2010 and the new textures and effects keep this looking great. Racing games, of course, have a slight advantage over many other remasters in that you should always be going to fast to pay attention to anything that doesn’t look good. Even utilising the new in-race photo mode, however, shows that the graphics are nothing to be scoffed at, even if they don’t quite reach the levels of the made-for-modern-hardware likes of the Forza series
+ the Autolog system returns, allowing you to quickly and easily find where friends have beaten your times and challenge them on the specific tracks (though for some reason, mine was constantly showing me recommendations in Spanish and Russian? Maybe it is based on your friends’ selected language, not your own?) Unfortunately, the EA servers are no longer operational, so you cannot brag with a screenshot and tag your friends to taunt them any longer 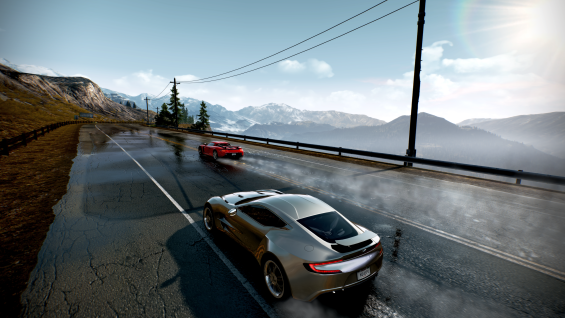 Wide open landscapes are there to view… if you slow down enough.

Vroom vroom. What an expensive screenshot.

– in terms of performance, the game does have some very slight slowdown when going through the tunnels, especially when driving the police cars, due to the lights flashing on the walls. I’d like a way to turn off the lights and sirens, just for my own sanity
– aside from performance, I only have one major complaint, and it is something that has not been changed since the original game: you cannot turn off the ‘confirmation camera’, ie. when you successfully hit a pursuer with a spike strip, etc. If you are unlucky enough to come out of this special camera shot heading toward oncoming traffic or a road block, you are entirely unable to adjust, and you’ll certainly crash. Similarly, if you head into a sharp bend as the camera begins, when it finishes you’ll more than likely be plowing straight into the wall of the track

> I have fond memories of jumping between the 2010 Hot Pursuit and Split/Second: Velocity, another racing game of sorts, as both had very similarly feeling drift mechanics. If anyone from Disney is reading this, care to make a MoshFish’s dream come true and remaster Split/Second?

Should you play this game: From the moment I saw the (genuinely quite emotionally investing) reveal trailer, I was hooked and ready to get back into this. This was part of Game Pass, though I personally would have been happy to pay to play this, and any racing fan will still get a kick out of the various game modes and satisfying high speed driving.