Published and developed by Toukana Interactive, Dorfromantik (literally “Romantic Village”) is a puzzle game available on Steam, and was released in 2021. Essentially a tile matching game, each hexagon piece features one or more of five type of environment: city, forest, fields, river, or train track. Placing a tile so one or more edge matches that which it is against gives you points, and eventually mini quests pop up such as having a forest of a particular number of trees, or a certain number of fields all touching each other, which grants additional pieces to use. Special tiles become available by completing their requirements in game, which can combine these assorted environments in unique ways, and the game ends once there are not more playable tiles.

+ the game is incredibly relaxing. With no combat, resource management or collectables (in the traditional sense) to speak of, games can breeze by or last all night depending on the speed you want to place tiles down. There is a high score system, but frankly I’ve been just playing for fun this far (and between you and me, my high score is just under 10,000, while the top of the leaderboard is well over 2 million; I call shenanigans)
+ every game will start off relatively similar, but the longer you play in a single session your world will evolve in very different ways. Especially once quests appear for, as an example, having a village of a particular number of houses – and no more or less than that number – you’ll find yourself creating isolated little villages in the forest just to ensure you can continue to unlock pieces
+ the game has an adorable art style. I am reminded of the board game Catan, with the hexagon shapes, and the little cartoon houses, trains and windmills on the pieces all mesh together when placed to become a living little world that you created. It’s immensely satisfying to finally get a piece that has a line of trees going in a particular direction and joining up two smaller woods to create one large, dense forest 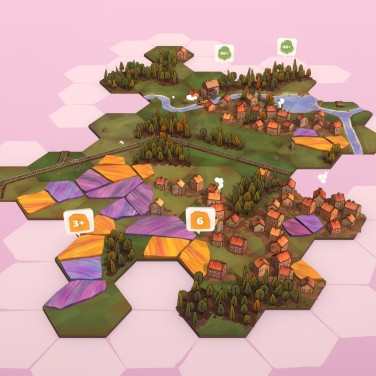 An example of the early game, with “quests” for the forests and fields. 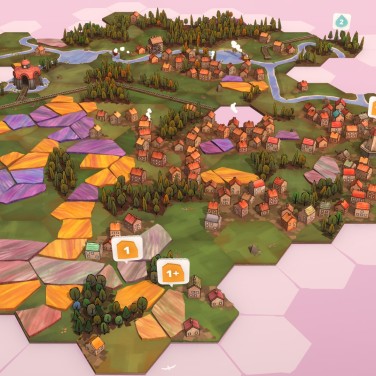 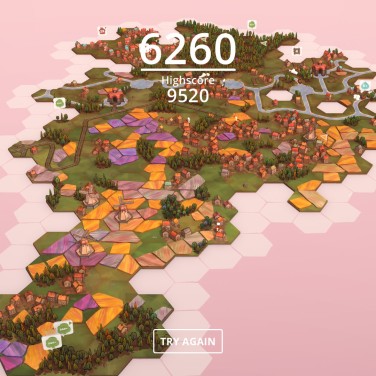 The final world, after running out of tiles.

– the game is currently in early access, so there are a few issues with balancing, for lack of a better term (by that I mean, there doesn’t seem to be any controlling of how frequently you will get a certain type of piece, to the point where I have been given four train track end pieces in a row as my first four pieces, so I just restarted)
– again because the game is in early access, some new features may not be amiss, including an ‘undo’ button or a ‘bank’ to store a single piece in for later. A few times I have accidentally placed a tile in a wrong spot and have had to deal with my mistakes. Yes, I do plan on saying these things on the Steam forum

Should you play this game: I bought this on a whim because the art style appealed to me, and I absolutely love it. It’s not often I will forgo a few hours on a console to sit at my desk after doing so all day for work, but this game has caused me to do that with surprising frequency.