[Please note: there are FULL spoilers for the entire seventh episode of season 1, as well as all preceding episodes.]

Awakening after her Halloween escapades, and still in costume, Wanda is told by Tommy and Billy that their video games are acting up, including the controllers changing shape and even turning into simple Uno cards. Billy also mentions that his head is “really noisy”, alluding to his unlocked psychic abilities. Wanda talks to an in-house camera crew, seemingly as part of a documentary, where she locks herself to a quarantine-style ‘staycation’. As she makes herself breakfast, the milk carton changes form outside of Wanda’s control.

I don’t know what this means, but it definitely can’t be good.

The Hex has grown, and now appears as a Hex when viewed from the side.

Following their escape of the S.W.O.R.D. base, Director Hayward and his remaining agents are unable to intercept the WandaVision broadcast signal. Hayward wants his team ready to launch an operation, today. Inside the Hex, Vision awakens at the base-cum-circus, where various clowns are performing, where he is informed by S.W.O.R.D. agent-turned Strongman that Vision to be working with the escape artist. Vision recognises the escape artist as Dr Darcy Lewis, but under Wanda’s control, Darcy has no memory of their meeting.

At home, Billy asks Wanda what “Uncle P” said on Halloween night about Vision being unable to die twice, and Wanda immediately tells the boys that Pietro is not her brother, and not the twins’ uncle. Wanda’s slight breakdown continues, as she tells the boys that life is meaningless (though they can of course draw their own conclusion). Just in time, Agnes enters and offers to take the boys out of Wanda’s hands for a while, and while the twins are unsure, Wanda is adamant that they go. Now alone, Wanda experiences more reality shifts around her, as plants, furniture and the TV change form, though she is able to revert them with her powers.

Still heading to meet Monica Rambeau’s aerospace contact, Monica and Agent Jimmy Woo discuss Darcy’s successful hacking, and her uncovering of Director Hayward’s mysterious “Project Cataract”. They discover that Hayward had been trying to get Vision’s body back online before Wanda stole his body. Arriving at their destination, Monica and Woo meet with Major Goodner a former ally of Monica’s mother. The S.W.O.R.D. insurgents unveil a vehicle used for deep space exploration, intended to breach the Westview Hex. Still inside the new circus, Vision “awakens” Darcy, and the two make an escape from the area in a food van. 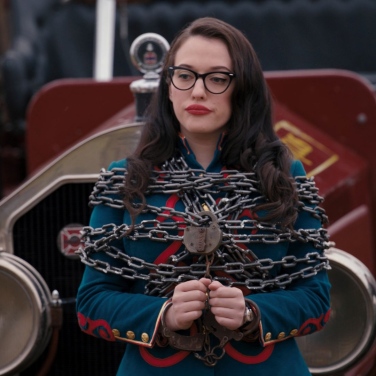 Agnes (OR IS IT) has been a showstealer this whole season.

At home, Wanda’s home begins to change once more. Again talking to the imaginary filming crew, Wanda cannot explain what’s happening, before someone behind the camera asks Wanda if she thinks this is what Wanda deserves. Wanda is surprised that someone was able to talk.

An advertisement is shown for an antidepressant tablet known as “Nexus”, for when you are feeling like the world goes on without you: “Because the world doesn’t revolve around you. Or does it?”

At Agnes’ house, Billy tells Agnes he likes it at her house, because it’s quiet, and Agnes is quiet, “on the inside”. Tommy questions whether Wanda will be okay, and Agnes reassures them Wanda will be fine – though Agnes implies otherwise to the film crew. Outside the Hex, Rambeau’s attempt to breach the perimeter is unsuccessful and almost deadly, as the truck is transformed and Monica is almost, too. Against Agent Woo’s advice, Monica runs into the Hex, finally able to breach it, now able to visually perceive the electromagnetic spectrum. Shedding her space suit, Monica heads towards Wanda’s house. 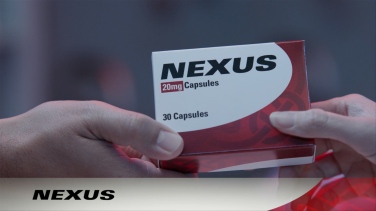 Nexus, a unique antidepressant that anchors you back to your reality. 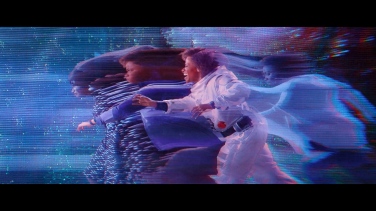 Monica Rambeau, overcoming her failures to enter the Hex. 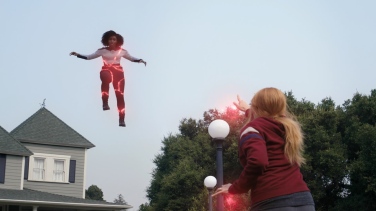 At Wanda’s house, Monica Rambeau and Wanda begin to fight, but Wanda finds herself unable to overpower Monica as she has in the past. Monica tells Wanda to “take [her] out”, and when Wanda hesitates, Monica pleads for Wanda not to be the villain. From next door, Agnes arrives and ushers Wanda away from Monica. Meanwhile, Darcy and Vision discuss the past, including Vision’s deaths by Wanda and Thanos. Numerous inconveniences impede their progress, before Vision simply decides to fly home.

Inside Agnes’ house, Wanda notices Tommy and Billy are no longer there, and Agnes tells Wanda they must be playing in the basement. Heading downstairs, Wanda finds demonic roots have taken hold, and the boys are nowhere to be found. Noticing a pulsing book nearby, Agnes enters and reintroduces herself as Agatha Harkness, another magic user. It is revealed that many of the happenings in Westview have been because of Agatha’s influence. In a post-credits scene, Monica opens the door to Agatha’s cellar, before she is accused of snooping by “Pietro”. 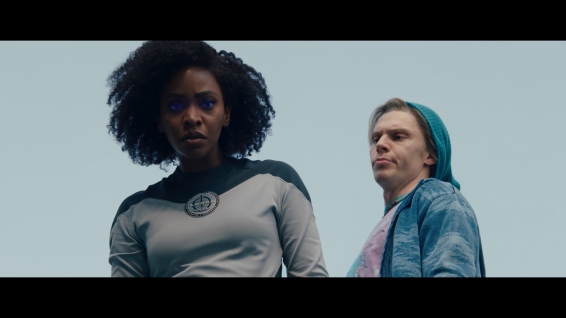 + though primarily based on Modern Family, I felt the opening montage had some Parks & Recreation vibes, as well as the obvious Office-inspired song itself. There were a few fun bits in there, including the magazine cut out “I KNOW WHAT U ARE DOING WANDA” and a single goldfish (presumably named Wanda)
+ it’s clever that this mockumentary style of episode happened after the S.W.O.R.D. base was no longer able to view the broadcast, as there is no plausible way to justify Wanda allowing this “footage” to be shown
+ Wanda’s breakfast cereal was called “Sugar Snaps”, possibly an allusion to Thanos and the Infinity Gauntlet seen in Avengers: Infinity War and Avengers: Endgame. The box also had a (terrifying) image of a clown on them, referencing what happened to the S.W.O.R.D. base at the end of the previous episode. There was also a “missing” picture for a young child on the milk carton, but I couldn’t catch who it was meant to be
+ the advertisement for “Nexus” antidepressants was a fun nod to some comic lore, but it was the first which didn’t directly tie back to the Marvel Cinematic Universe we have already seen. I like that we are expanding our horizons a bit
+ I suppose Agnes wasn’t there when the twins displayed their new powers in the previous episode. Though the reveal implies she was behind the scenes of everything, we can’t say for sure she knew they had powers at all
+ a brief glimpse during the standoff between Wanda and Monica is the first time we’ve seen Dottie since the radio incident in episode 2, as far as I’m aware. I have high hopes that she will be someone important, too
+ the post-credits scene is the first we’ve seen of Pietro (if that is his real name) since Wanda yeeted him through some Halloween decorations. My current theory is that “Pietro” is actually whoever or whatever “Ralph” is, and will be revealed to be working with Agatha. I expect a Monica/Pietro fight scene to kick of the next episode

– Monica’s contact was not revealed, though in the previous episode she had said they were at the meeting spot. I mean no disrespect to “Major Goodner”, whoever that may end up being. but milking this only makes the hype more real, so it HAS to be someone important, right?
– similar to the above, I found the entire scene with Monica, Woo and Goodner attempting to breach the Hex entirely a waste of time. Both the engineer tease and the reveal of the advanced vehicle were things that had been hyped for a while, and neither were anything important at all; the truck didn’t even work!
– I’m not a fan of exposition dumps in general, but especially when they come seven episodes into a nine episode TV series which already bases itself that viewers have watched at least the important entries from the previous 23 feature films
– I personally found the Agnes/Agatha reveal very anticlimactic. The song was catchy, of course, but Agnes just saying to Wanda (and perhaps literally us, if she has reality warping powers of her own) that she was another person whom we, as a MCU only viewing audience have never heard of, means nothing

Final thoughts: Truthfully, this was one of the weaker episodes of the show. Of course it revealed lots for the overarching story, but the long stretches involved Darcy/Vision rattling off exposition dialogue, and the ultimately unnecessary space vehicle sequence really turned me off.