[Please note: there are FULL spoilers for the entire second episode of season 1, as well as all preceding episodes.]

As Wanda is awakened at night by a looming thudding noise, she wakes Vision by magically turning on the bedroom light. The two debate who should have to deal with the noise, before Wanda opens the curtains to reveal the culprit: a stray tree branch. With the situation settled, the newlywed couple turn out the lights (wink wink).

The next day, Vision and Wanda are practising a (clearly fake) magic trick for the upcoming talent show, but their time is cut short, as Wanda must head to the planning committee for the talent show, as Vision has a meeting with the Neighbourhood Watch. After Vision leaves, a whirring overhead draws Wanda outside, where she finds a toy helicopter in the front yard bushes. Hiding the toy from Agnes, the two head over to the house of the planning committee leader, Dottie (Emma Caulfield Ford). 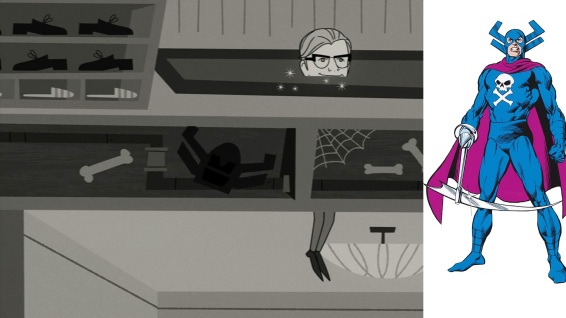 “A little ostentatious, don’t you think? Tell you what. Throw a little hot-rod red in there.”

At a pool nearby, Dottie does little to endear herself to the other committee members, especially Wanda. Stressing the importance of the talent show, Dottie notes that “The devil’s in the details.” Agnes makes sure to mention with a knowing look, “That’s not the only place he is.” Meanwhile at the library, Vision brings some new issues to the table of the neighbourhood watch, but almost outs himself as a non-human, before accepting a stick of gum to save face. The gum gets stuck in his gears (metaphorically, I assume)

Following the planning meeting, Wanda is “helping” Dottie clean up, and Wanda attempts to correct her first impressions from Dottie. However, Dottie believes Wanda, and Vision, to be threats to the neighbourhood. Suddenly, the radio turns to static, and through the noise comes a desperate plea from an unknown source: “Who is doing this to you, Wanda?” Dottie breaks a glass in her hand, with a deep crimson spreading from the wound.

An advertisement is shown for a high-end, Strücker branded watch – “He’ll make time for you.”

As Vision runs late to the talent show, the gum in his gears is causing him to act aloof and easily distracted. In front of the combined neighbourhood watch and planning committee, Vision forgets he is to keep his powers a secret, and begins to fly, lift a piano, and pass his hat through his own torso, causing Wanda to magic up some over-the-top fake explanations, such as a rope rig and mirrors. Backstage, Wanda uses her abilities to remove the gum from Vision, and he soon snaps back to his senses. Deciding to leave before facing Dottie’s wrath, the two attempt to escape but are instead declared the inaugural winners of the comedy performance of the year.

“Strucker, he’ll make time for you.”

Is that Tim Blake Nelson, last seen in The Incredible Hulk (2008)

A magical kiss adds some colour to the world.

Back at home, the pair decide they don’t need to try so hard to hide their fit in to the neighbourhood after all. As Wanda stands up, Vision notices her stomach, and that Wanda is very clearly pregnant. The two decide to go through with whatever is happening, and head in for a kiss – but a lound bang snaps Vision’s attention, and the two head outside, where a drainage gate ont he ground is being pushed open, and a strange figure in a beekeeper suit emerges. Seemingly recognising the man, Wanda flatly says “No”, and time rewinds to just before the couple’s kiss. As they kiss, the colour returns to Vision, and the world

+ I’m sure we all noticed the helicopter – both the colour scheme and the logo on its side!? To me, it looked like an Iron Man paint job, and a suspicious looking S.W.O.R.D. symbol. It’s not the first time we’ve seen the latter symbol already this season
+ but before that, did we all notice a peculiar helmet in the animated opening? I wonder what could kill a grim reaper, or if he’s even dead
+ if the first episode was I Love Lucy and 50s TV, this was undoubtedly I Dream of Jeannie and an ode to the 60s. If the theme continues, and we get the 70s next week, I imagine it may be akin to The Brady Bunch, Mork & Mindy or Happy Days, or even That 70s Show, since they already have Debra Jo Rupp on the cast. I’d expect at least one leather jacket, no matter the decision. I can’t wait to see how recent they will go
+ I am super interested as to who or what Agnes’ husband, Ralph, is. Ralph has been mentioned many times, but so far never seen. If he is as pathetic as Agnes makes him out to be, surely that would make for a good comedy character
+ “gum drunk” Vision was basically just Paul Bettany playing his character from A Knight’s Tale. What a call back
+ especially when seen from the profile, the guy in the beekeeper suit looked like Tim Blake Nelson, who played Samuel Sterns (aka The Leader) in 2008’s The Incredible Hulk. I have no idea if he is scheduled to appear or not, but that’s who I thought it looked like
+ to me, the voice on the radio, and again after “The End” was Randall Park, who has been confirmed to be starring at some point in the future. We last saw him in Ant Man & The Wasp

> after two episodes, it seems that the commercials in the middle are people relevant to Wanda’s life: Stark Industry weapons destroyed her home, Baron Strucker raised her and her brother. Don’t be surprised to see some “Quicksilver” clothing or a “Hawkeye” bird seed in the coming episodes

Final thoughts: I loved this episode. Where the first felt too different, this is starting to show the connections to the greater film universe we have all been waiting for. Although there were arguably too many reveals in this, only the second episode, it certainly sets the scene for big things to come.