The following is a guest review from DrXan.

The follow-up to Obsidian’s 2015 role-playing game (RPG) Pillars of Eternity, Pillars of Eternity II: Deadfire begins with a definite change in fortunes for the Watcher, as you die. Soon resurrected with a gods-given task to stop a colossal avatar, you set sail upon your new vessel in a swashbuckling adventure in the Deadfire archipelago. This review will cover the base game as well as the three major story DLCs.

+ the immediate difference in setting between Deadfire and the original is reinforced from the first environments and locations you explore. Gone are the drab castles and hamlets of the Dyrwood replaced with the lush tropical islands and bustling trading outposts of the archipelago
+ the change in setting leads to a transformation in the feel of the game as well; even if you choose from the returning large roster of classes and backgrounds you can now also add ship’s captain and possibly pirate to your resume. The whole feel is more grand age of sail as opposed to the swords and sorcery seen previously
+ having a customisable ship is both a key feature as well as a joyful experience to manage. Choosing a cook, surgeon, cannoneers and a boatswain all felt like important decisions early in the game. Many little touches around the ship are also appreciated; the ability to display unique triumphs, the option to rename your ship and have written dialogue reflect this and the option to pain your ship a variety of garish custom colour combinations
+ after the starting island you are given full freedom to explore the scattered islands of the world map. There are no restrictions about where you can sail and who you can fight beyond the common sense to know most people will crush you after just starting the campaign
+ the open, busy ocean swarming with enemy, ally and neutral ships creates a living world map that helps sell that these islands are being inundated with outside trade and the accompanying forces
+ every ship can be attacked, either in a ‘sea battle’ (see below) or via boarding action. This leads to a replayable arena style of combat that can have real outcomes on morale and plunder. Farming these ships, or only targeting certain factions is up to you, with certain factions hunting you down dynamically in the world
+ certain companions return, with their endings from the original game considered (you can import a save file whilst also making a new character if you want). Any characters you didn’t leave on very good terms with will be sure to let you know upon running into them. Your choices from the first game also carry over; being chided by a god who quotes your own actions in the last game stings more than it really should and being able to call out others with your own exploits is always appreciated 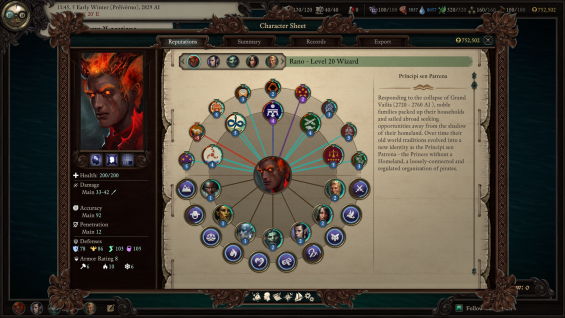 Your ship on the ocean. 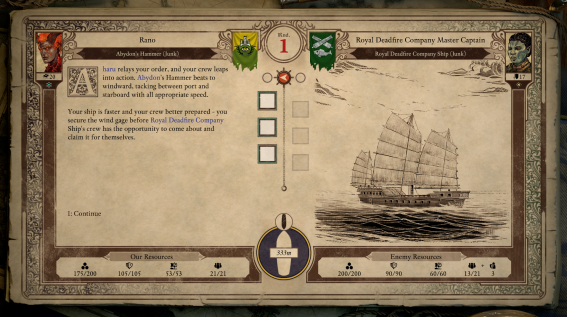 – why does a game that is so large in comparison to its predecessor feel so empty? Where the original game had hand crafted explorable environments (and Deadfire has many of these to be sure) you are often being dropped into ‘Swamp’ or ‘Cliffs’ to have a fight seemed like a cheap excuse to reuse empty environments
– whilst there may be plenty of islands and regions that make up the play area many are little more than stopping points; a small amount of resources to resupply with, surrounding a single location to explore, often amounting to little more than a few rooms
– the selection of companions on offer ranges from the boring through the irritating in both personality and abilities. Having two of the new companions tied to factions specifically results in a story where you can betray one faction whilst their representative helps you do it. Conversely, a returning companion will abandon in all occasions unless you side with their faction. The personalities of the companions don’t feel as fleshed out as the previous game; one companion doesn’t even have a dedicated companion quest. Finally, the addition of so called ‘sidekicks’ seems a tacit admission that the companions may not be to everyone’s taste
– the expanded reputation system is more of a curse than a blessing. Your companions now have their own reputations and opinions of each other that can be affected by your dialogue with each. Whilst its more obvious that as characters not everyone should get along, I feel it’s unfair to chastise the player for choosing a healer and a tank that don’t see eye to eye (I even know that some players created character generated companions to avoid these issues)
– whilst the ship and its management is a fun side-mechanic that is themed with the game, the use of a text-based system for naval combat is frankly boring. You are encouraged to build a competent crew and have cannons a plenty only to be met with a series of what amount to dialogue options when facing another ship. 99% of my combat encounters lead me to immediately board the enemy and engage in the usual combat style to save the time, effort and boredom of selecting ship movements I couldn’t even see
– the text-based encounters return from PoE but are infuriatingly common; most islands and even traversing between districts in the main city will result in a skill check. By the latter half of the game, especially in the DLCs, these checks can be hugely weighted against the player, requiring perception, strength or athletics far beyond a balanced max level character. Whilst this was charming in the first game it is overused and over relied upon here as a means of artificially testing the player on their ‘optimal build’
– the final and main negative of the entirety of Deadfire is the story and its ending (which I will not spoil). When I asked myself at the midpoint of the game ‘why should I care about the story?” and the game answers ‘you shouldn’t! The characters don’t’ then something is deeply wrong with the writing and tone. This stems both from the factional nature of the primary plot and the major motivation of the primary antagonist. If I don’t like any faction, don’t agree with their plans or politics what impetus do I have to save them? The only truly evil faction in the game can be wiped out but this only serves to help one of the competing main factions

> I don’t think its worth noting it as a negative point, but I feel that obsidian butchered my class of wizard. When we could previously choose from a huge variety of spells each level, instead we are stuck with rigid grimoires that come with a set selection of spells. This really does crush the creativity of the class in spell combinations and makes you feel like retraining your character from level one every time you find a new spell book
> the game introduced voice acting for the vast majority of conversations, but the writing and story make this only a neutral point of interest
> the DLC for the game were much like the rest of the game: boring with a few bright spots, with only The Forgotten Sanctum having any sense of levity (at least by comparison to the main game)
> I would trade 4 of my companion choices just to have Kana Rua the happy philosopher back with me on this adventure. I feel I mistreated my companions in the first game; I didn’t know how good I had it.
> the sea shanties your crew sings as you sail are absolutely top notch and are in-game versions of real shanties, including one about your own actions in Poe 1.

Should you play this game? I think I can best answer that with this: the ending of Deadfire made me mad. So mad that I left finishing the game for about a week and played other things to avoid it. It is disappointing to a degree I can only compare to MoshFish’s feelings on Mass Effect 3: choose your flavour of shit to be forced down your throat. It is a self-defeating end to a franchise and something I should have left unfinished. If you enjoyed the first game keep that bright and untouched by not playing this game.