The following is  a guest review from DrXan.

The first game that comes to us from Polish developers Star Drifters is Driftland: The Magic Revival, a strategy game built around base building and resource management, as well as introducing a unique environmental mechanic. The game sees three (or maybe four!?) factions battling for dominance on the floating island remains of a fantasy world. The game has three (or four?!) campaigns based around each race and their struggle to dominate the Driftlands sparked by the gradual return of magic.

+ the main draw of the game comes from its unique floating island map design; resources must be mined or harvested from islands connected by bridges and portals, all of which can be destroyed or disconnected. Islands can also be moved using magic, opening up a range of tactical options around resource management and military strategies
+ each race (humans, dark elves, dwarves and maybe another one…) each have access to their own unique spells and units based around their own racial identity. Whilst there is plenty of overlap, the unique spells felt well themed to their race and made sense in their play style
+ the campaign missions range from the simple ‘build up and destroy’ objectives through to more unique ideas, such as the ability to move your island base around the map like a floating fortress of doom. The lack of direct control of units meant these varied missions’ types were a welcome change of pace 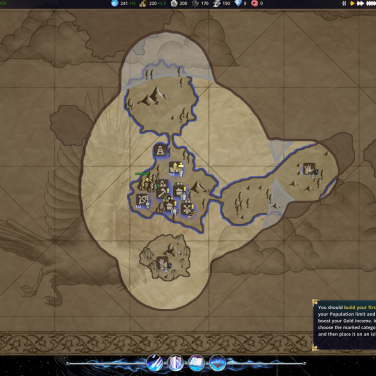 A tactical overview of an early stage island.

– it’s clear that the story and translation were roughly done; exposition is delivered entirely in tiny text boxes that pass bye at lightning speed, and the lack of voice acting in-game really hurts the immersion and impact of the story as a whole
– whilst the races have a limited number of unique spells or units the overall unit design feels too similar based around the melee, ranged and magic unit types, no race seems to have a wholly unique unit or identity
– the lack of a proper tutorial for each race means the learning curve is more like a cliff here. It was only after reading a wiki and in game unit descriptions that I realised some important racial abilities are only for certain units

> the developers are promising a free DLC faction in the coming months, as well as ongoing balancing and support for the current game
> my pet peeve as an achievement hunter is achievements that ask for a ridiculous amount of a certain task. In Driftland this is opening treasures on islands, all of which are randomly generated and is the only single player achievement I am yet to accomplish after almost 60 hours of play time

Should you play this game: This felt like a game with lots to say but no good way of telling you about it. Hints of good ideas and an engaging story are there, but they pass bye so quickly as you focus on the gameplay. A lack of racial identity is only exasperated by a lack of tutorials that show how each race is different and why you would want to pick a favourite. Having spent 60 hours in the game, my interest has long since drifted away.