One year to the day since NXT UK took over the Empress Ballroom in Blackpool, England, the UK brand returns for NXT UK TakeOver: Blackpool II. After making himself known in the final moments of that first event, and going on to win the NXT UK Championship at the following event, WALTER has been on a tear as the undefeated NXT UK Champion. Standing in the Austrian Ring General’s way tonight is Joe Coffey, the leader of Gallus, the man who was thrown to the wayside upon WALTER’s debit one year ago, and he is looking for revenge for that disrespect. Four of the top tag teams of NXT’s UK branch will also vie for the tag team titles, as Gallus (Mark Coffey & Wolfgang) defend their gold against the teams of Imperium (Marcel Barthel & Fabian Aichner), the Grizzled Young Veterans (Zack Gibson & James Drake) and the South Wales Subculture (Mark Andrews & Flash Morgan Webster) in a Fatal Four Way Ladder Match. The NXT UK Women’s Championship will be on the line in a triple threat, as defending champion Kay Lee Ray faces off agsint Toni Storm and Piper Niven, and both members of Moustache Mountain, Tyler Bate and Trent Seven, face off against Jordan Devlin and Eddie Dennis, respectively, in highly touted singles action.

+ WALTER (c) vs Joe Coffey (WWE United Kingdom Championship): I can’t say I’m entirely on board with Gallus as a good-guy faction, especially as they go against my long time favourite in WALTER, but Coffey had some good crowd reactions for his comeback spots. These two did not seem to be entirely on the same page, and it did lead to a few very obvious miscommunication issues. I don’t know if Joe Coffey has improved all that much since his run as part of The Prestige in WCPW a few years ago, but putting him in the ring with WALTER must only be a good thing. Still, he was the clear weak link in this match, but some fun post-match sheanigans made it overall worth it
+ Tyler Bate vs Jordan Devlin: incredible. An early contender for match mof the year, especially if you want to limit it to WWE-based products. Bate is fantastic, and Devlin has had a real string of great matches as of late (his match against former favourtie David Starr in Dublin for OTT was great, and if you’ve not seen it, watch it here) so the two of them together was something really special. A few awkward pauses and shuffles around the ring can be forgiven, almost entirely because of the back and forth punches that were thrown towards the end. This match was great, and if WWE doesn’t promote it on their main shows to get some new fans watching NXT UK, then they don’t know what they’re doing
+ Kay Lee Ray (c) vs Toni Storm vs Piper Niven (NXT UK Women’s Championship): this was pretty good for the most part, but the finish left me feeling a bit flat, despite me being a big fan of the winner. When these three were each playing one-on-two (if that makes sense) then this was really good, but as soon as it turned into the standard ‘one person rests outside while the others do a singles match’ then not only did the crowd lose interest, but I found it hard to care. Niven was really impressive, only if I knew that Storm and Ray were great already, and this was overall a good match

Tyler Bate hits a HUGE aeroplane spin on Jordan Devlin, and the crowd rises to their feet 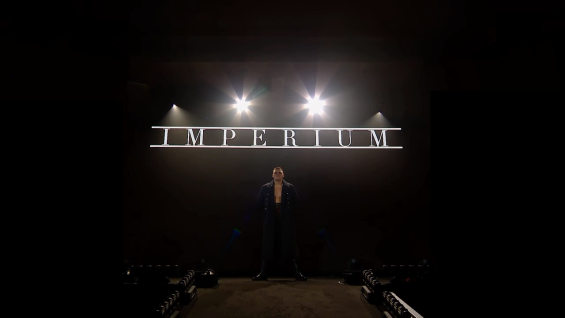 – Gallus (Mark Coffey & Wolfgang) (c) vs Grizzled Young Veterans (Zack Gibson & James Drake) vs South Wales Subculture (Mark Andrews & Flash Morgan Webster) vs Imperium (Marcel Barthel & Fabian Aichner) (Fatal 4-Way Ladder Match for the NXT UK Tag Team Championships): I did not care for this match at all. As commentary stated, NXT UK’s tag league is one of the best in pro wrestling, shown clearly here that all four teams have different looks, gimmicks, long-term goals and thoughts on ladder matches in particular, and all of that was thrown out as the match began. This was an overly choreographed spot fest, and while those spots were in fact pretty good and/or dangerous as a viewer to see, I just can’t get over ladder matches where teams don’t try to use the ladders to win the match
– Trent Seven vs Eddie Dennis: truthfully this was not very good, outside of the very good ending. Dennis is not really on the same level as the Moustache Mountain guys, and Seven in particular is really good. I remember the Dennis/Mastiff match from TakeOver: Blackpool last year, and I can’t say Dennis is much more impressive than he was then. This was easily the weakest match on the show
– five matches over 2 and a half hours is fine, if you have the talent to make it work, and simply put that was not the case here. The Triple H-inspired wank-fests like Adam Cole/Johnny Gargano are horrible, but they at least work for the styles those guys wrestle with, and that is not the same for this here. Much like event some NJPW main events, seeing a champion retain (or lose, as the case may be) in a sold 10 minute match is something more effective than having them eke out a win in a 30 minute “classic”

Should you watch this event: The ladder match and especially the main event seemed to go far too long, and both could have comfortably taken 5 to 10 minutes off and been just as good if not better. Bate/Devlin was a bona fide match of the year contender, and you should go out of your way to see it, but only really catch the rest unless you are a fan