[Please note: there might maybe some spoilers here? Basically all the good stuff from the movie was in the trailers, so none of it should be a surprise.]

From Neil Marshall (director of Dog Soldiers, Game of Thrones‘ “Blackwater” and my guilty pleasure Doomsday) comes the 2019 comic book adaption and big screen reboot of the series of the same name, Hellboy. Hellboy (David Harbour, Stranger Things) is required by the BPRD – the Bureau for Paranormal Research and Defense – to stop the resurrection of an ancient Blood Queen (MIlla Jovovich). Hellboy is under the direct command of his father, Trevor Bruttenholm (Ian McShane), and joined by a medium, Alice (Sasha Lane) and shapeshifter, Ben Saimio (Daniel Dae Kim).

+ truthfully, all of the actors are good, but none of them seem to own the role the way that Ron Perlman did the title character in the earlier films. Stephen Graham as the voice of the pig-demon-fairy-thing Grugach was a personal highlight, and I really enjoy Kim as an actor, but even his role was too thin to make anything of it
+ the practical effects and make-up looks great. Hellboy’s worn and dirty, darker red skin is immediately different to Perlman’s cleaner, smoother look from the previous film. The Baba Yaga (performed on set by internet-cult contortionist Troy James) is terrifying 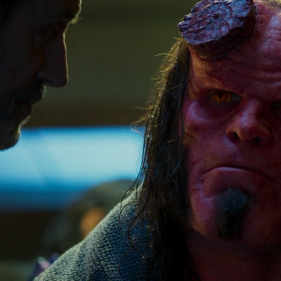 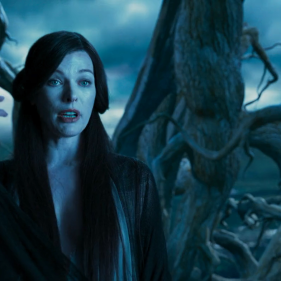 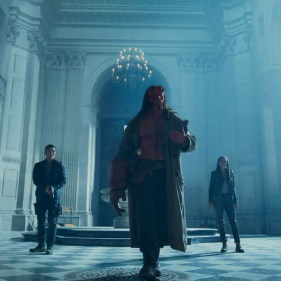 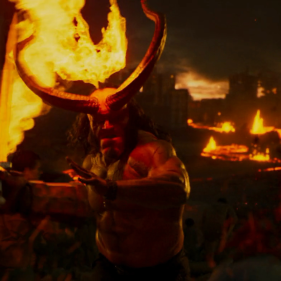 – the whole film feels like an almost unconnected series of comic page adaptions which have been hastily (and poorly) cobbled together once a beginning and ending was filmed. The black and white opening was my favourite scene, which is a disappointing thing to say
– there is some really horrible CGI. Compared to the phenomenal practical effects and make-up, some of the CGI is something from the past decade, and is not even bad enough to watch and laugh at
– all throughout the movie is a wildly inconsistent tone. In the same scene, the movie attempts something like horror (or at least as horror-y as the comic series based on a literal hell spawn can be) but then right before the major climax, a poor joke ruins the tension. Just as things should be at their most tense, an entire flashback scene destroys the pacing. I feel as if they wanted Hellboy to be Deadpool, but also the Hulk. But also a demon
– I’m never one to shy away from gore (in fact, I probably enjoy it more than I should), but all of the gore in this just feels unnecessary. Limbs and torsos flying across the scene is almost funny the first time, but it soon gets pretty old

> all that controversy about Ed Skrein not being Daimio seems a bit silly when the Korean Daniel Dae Kim is playing a Japanese character. To me that seems just as incorrect

Should you see this film: Absolutely not. As hard as Harbour and Jovovich tried, this was as sterile and dare I say poorly made film as I’ve seen in a long time. I really like the original films, and outside of the time I wasted on watching this movie and writing this review, I am even more sad that Guillermo Del Toro will never get the chance to finish his trilogy.