It’s lucky number 21 for the Marvel Cinematic Universe (MCU), and finally the first female-led entry, as Brie Larson stars as the titular Captain Marvel. Under the command of Yon-Rogg (Jude Law), Vers (Larson) is an amnesiac member of Starforce, a team of Kree heroes attempting to stop the ravenous Skrulls in a seemingly neverending war. After crash-landing on Earth in the mid-1990s, Vers must team with younger-than-previously-seen Nick Fury (Samuel L. Jackson) and attempt to evade the villainous Skrull commander, Talos (Ben Mendelsohn). With an unknown connection to Earth and some of its inhabitants, Vers must discover her own past and put and end to the Kree/Skrull War.

+ Law, Mendelsohn, Lashanna Lynch (Marie Rambeau) and Annette Benning (the Kree Supreme Intelligence) are all fantastic, the former two in more substantial roles than the latter. Mendelsohn, in particular, spends his role under heavy prosthetics, but still manages to be the highlight of both the comedy and heart of the movie due to some incredible voice work (although, even I was a bit put off by this alien speaking with such a strong Aussie accent). Lynch, upon my finishing the movie, stood out as one of my favourite characters, and with a familiar last name, I expect we’ll see some more of her in the future
+ good action, when hand to hand, but the more “flashy” moments were a bit of a mess. In a very similar vein to Star Wars, which I make no secret of my dislike, when it was melee combat, this movie really had some great choreography. Once it turned into “Captain Marvel flies around shooting lasers out of her hands” I lost all interest
+ there were a few really good comedy moments, mostly just one-liners from unexpected sources. Fury being overly fond of the cat named Goose was good for a chuckle, but wore thin towards the middle. It picked up again near the end 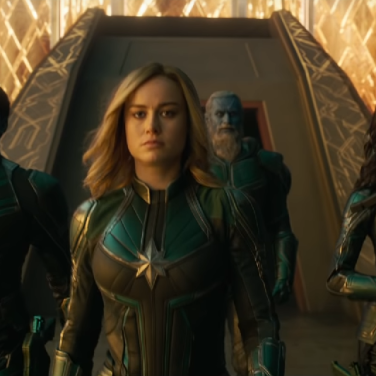 – Brie Larson was wooden and dull, in almost every conceivable scene. Whilst other characters seemed to play off each other, it almost felt like Laron was filmed at separate times to everybody else (though I freely admit maybe that was just bad editing). Similarly, and unfortunately, I didn’t really like Sam Jackson as the supporting role. Seeing this young and relatively inexperienced version of the mysterious, battleworn commander we know from the other movies may be something other enjoy, but I feel it was nothing but a detriment to his character
– I really wanted more from the Starforce, especially Minn-Erva (Gemma Chan). Aside from being ridiculously cute with blue skin, Minn-Erva is a pretty big Miss Marvel player, and was relegated to a supporting bit here. Ronan (Lee Pace) and Korath (Djimon Honsou), the much touted Guardians of the Galaxy returns, are in the film for a combined three minutes, which felt like a waste
– much of the music felt shoe-horned in, just to try and leech off the success of Guardians of the Galaxy, and the James Gunn/Edgar Wright style (Baby Driver an example of the latter’s work). Netflix’s Umbrella Academy, another comic-to-screen adaption, pulled this aspect of with significantly more success

> there are some pretty huge story changes from comic-to-film, which could potentially have some long-standing effects, without even mentioning that the Kree race has been shown in at least two other MCU-relevant outtings.
> I have a minor personal hatred of prequels, because all they do is open plot holes for previous entries, or try to change the meaning of previously heard dialogue, and in this instance it just didn’t work
> I prefer Phyla-Vell as Captain Marvel, and would have loved a movie about her and Moondragon, which would also tie it into the Guardians of the Galaxy storyline, and they would be needed if the MCU ever tackles Annihilation, one of my favourite comic arcs

Should you see this film: Despite some pretty significant annoyances (that is, Larson not being right for the role) this is probably still worth seeing, though maybe not in cinemas. I enjoyed this (or did not enjoy this) about as much as Doctor Strange, for many of the same reasons.