Hot off the heels of the Crash Bandicoot N. Sane Trilogy is the Toys for Bob and Activision trifecta of Spyro the Dragon, Spyro 2: Ripto’s Rage! and Spyro: Year of the Dragon, collectively known as the Spyro Reignited Trilogy. For the most part, players control Spyro, the titular dragon, as he sets out to rescue his dragon ilk, defeat Ripto or save the world from a vile sorceress, in each of the three games respectively. Each level in each game as a bonus objective which add up to unlocking some bonus art galleries, and each game has trophies/achievements for completing secondary objectives in some levels.

+ the trilogy looks fantastic. Built from the ground up in the Unreal Engine 4 game engine, all the environments looks exactly as you might remember them (though, I personally only played a small bit of the third game, so I got to experience the majority of locations for the first time in HD). Spyro and his supporting cast are expressive and emotive, and each of the worlds, be it volcanoes, icy glaciers or underwater shipwrecks all feel unique
+ it is a refreshing change of pace to have such simple controls in a video game. Spyro can charge forward, jump and glide or shoot a small cone of flames, and for the most part that is it. It is the combination of your available skills that makes the most of the difficulty (though frankly, they never feel difficult unless you want to ‘perfect’ every level) 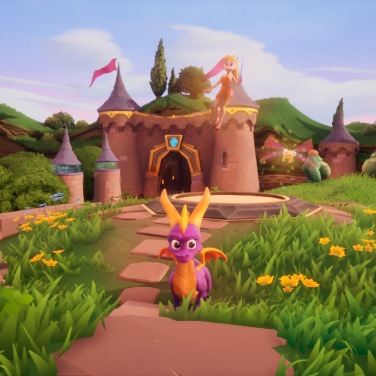 The worlds are all built from the ground up, and clearly made with love. 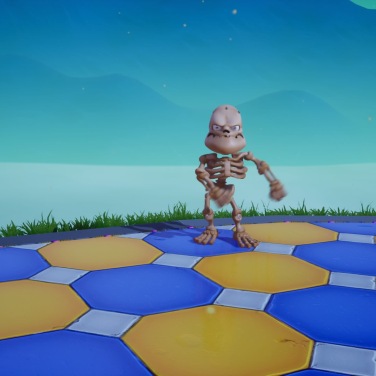 The skeleton is flossing. It must be a 2018 remake… 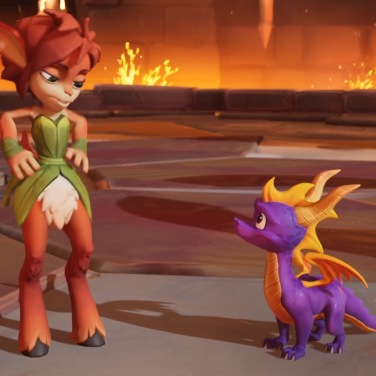 The cast of characters from every game are a charming bunch, even if Spyro is clueles to how they might feel about him.

– many of the mini-game/bonus objectives in the third game are just frustrating, rather than anything. It is a feature of these past games to be unforgiving, and while I wouldn’t say these games were at any stage difficult, the frustration of having to complete an entire mini game again because you stumble at the final hurdle is a pain in the butt
– the limited to non-existent accessibility options (my same old mantra of subtitles and colour blind options) are a huge downside. Finding a single red emerald floating in a field of grass, or knowing when my health was low due to Sparx’s colour were things I had no idea how to solve. I just had to run with it
– I hate games that let you earn more than a 100% total. It triggers me more than it should, even if it is technically “better than the best”

> it’s hardly a plus or minus of the games themselves, but I very much so preferred the first game. The second game was incredibly easy, and the additions of mini-games played as other characters in the third were full of far more misses than hits

Should you play this game: As an, essentially, first time Spyro player, I can’t think of more fun I’ve had than playing through these, the first game in particular. All three games looked great, the voice work was charming, and the simple gameplay meant I didn’t have to think too much. There was no challenge here, as there was in the Crash Bandicoot remasters, but if you ever wanted to show new gamers what the old days were like, I can’t think of a better way than with this.