[Please note: By the time I post this, and indeed you read it, the tournament is over, and a winner has been crowned. I have no idea who that may be, and to save myself some time, I am only going to review the G1 tournament matches themselves. There are potential spoilers for every previous day of action.]

New Japan Pro Wrestling’s (NJPW) annual heavyweight tournament concludes, where for the last few weeks, two blocks of ten competitors have competed in a round-robin format in the G1 Climax 28. The two winners – one from the A Block, and one from the B Block – will soon face off in the final, with the winner receiving the main event title match at the annual January 4th show, Wrestle Kingdom. Day 15 means the A Block competitors have to get their working boots on, as Kazuchika Okada and EVIL go to war in the main event in a repeat of one of last year’s best matches. Hiroshi Tanahashi faces Big Mike Elgin in the semi-main, and Minoru Suzuki, Hangman Page, Jay White and many more are all also in action.

+ Kazuchika Okada vs EVIL (G1 Climax A Block Match): this was another of the matches from last year that was going to be hard to top. This repeat performance was as hard hitting as you could want, with each man busting out wicked lariats or dropkicks that jolted their opponent’s spine. The final few minutes were crazy intense, full of counter after counter until one man finally got a hard fought win
+ Hiroshi Tanahashi vs Mike Elgin (G1 Climax A Block Match): Elgin doesn’t quite have the chemistry with Tanahashi as he does with Okada, but this was still a really good match. Only one slight miscommunication, right near the ending, was noticable, and otherwise this Taguchi-Japan stablemate battle was pretty good
+ Minoru Suzuki vs Hangman Page (G1 Climax A Block Match): I really enjoyed this, but gosh I feel bad for Page having to go through what he did. Converse to YOSHI-HASHI, Page has had a good tournament to show off what he can do to people who may not have seen him at his best. But frankly, Suzuki is Suzuki, and I give him most of the credit for making this the really good match it was 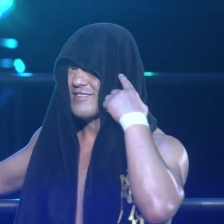 Minoru Suzuki, somehow even more terrifying when he smiles

Okada flies off the top rope (spoiler: EVIL gets his face kicked in)

– Jay White vs Togi Makabe (G1 Climax A Block Match): wrestling is weird sometimes, because if White defeated Hangman Page, and then Page defeated Makabe, surely Makabe has no way of defeating White? You’ll have to see for yourself if that’s what happened, but maybe don’t even bother, because this was nothing special at all. However, I’m surprised to learn that going into this match White was still alive in the tournament – I thought it was down to just Tanahashi and Okada. I’m happy to be wrong
– YOSHI-HASHI vs Bad Luck Fale (G1 Climax A Block Match): you know the deal. I admit something about this one didn’t bother me as much, maybe because I don’t really care for YOSHI-HASHI. HASHI tricked me early in the tournament where I thought he would go out of his way to make a name for himself here, but he never capitalised on the momentum from his better matches

Should you watch this event: Despite there being such a slim field of potential winners at this point, this show still had some good drama to spare. The run of the Tongans has not given me much to care for, but Elgin, Okada, Suzuki, Jay White and Hangman Page have each had enough going on for them that this made for a good show to watch.