New Japan Pro Wrestling’s (NJPW) annual heavyweight tournament begins, where for the next few weeks, two blocks of ten competitors will compete in a round-robin format in the G1 Climax 28. The two winners – one from the A Block, and one from the B Block – will then face off in the final, with the winner receiving the main event title match at the annual January 4th show, Wrestle Kingdom. The B Block returns on Day 4, with Kenny Omega facing Hirooki Goto in the main event, as Tomohiro Ishii, Kota Ibushi and Zack Sabre Jr. all also have huge battles against Tetsuya Naito, Juice Robinson and Toru Yano, respectively, with Tama Tonga and SANADA also on the card.

+ Hirooki Goto vs Kenny Omega (G1 Climax B Block Match): this started wildly, and by the time the two were throwing bombs at each other in the crowd (not literally, ya goofs) I knew it was going to be good. It is almost inconceivable that Goto won the G1 Climax a decade ago, but this fight between two former winners was everything you could hope for in a main event. Both men busted out some moves we haven’t seen in a while, and it really felt like a match either man could win at any time
+ Tetsuya Naito vs Tomohiro Ishii (G1 Climax B Block Match): holy shit. At points in the match, one guy chopped the other for about a minute straight, one guy went for a dropkick and bounced off the other guy’s chest, and one guy just punched the absolute hell out of the other guy in the biggest ‘that wasn’t a wrestling move’ moment of all time. This was phenomenal
+ Kota Ibushi vs Juice Robinson (G1 Climax B Block Match): this match between two absolute fan favourites was terrifying to watch. Juice is still working with a broken hand, and Ibushi seems to have no issues killing himself for us plebians’ pleasure, and both statements were proven absolutely correct here. Ibushi is so damned good, and Juice has such huge potential that I fully expect Juice to be a top champion at NJPW
+ Zack Sabre Jr. vs Toru Yano (G1 Climax B Block Match): dammit I loe ‘serious’ Yano. Yano is 2-0 in regards to matches I’ve enjoyed in this tournament, and if you liked the Ishii match then you’ll love this one too. Sabre has found his groove in New Japan, and I enjoy he and Suzuki’s combined sadism 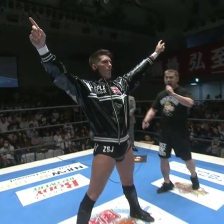 He is pro wrestling master. He is Z S J. He is, Zack Sabre Jr!

Juice Robinson, definitely living up to his ‘Flamboyant’ nickname

Tetsuya Naito remains tranquilo, despite knowing he is about to face Tomohiro Ishii

– Tama Tonga vs SANADA (G1 Climax B Block Match): as an athletic showcase, I doubt there will be much better in the whole tournament. But both of these guys are perennial “second in command” (although, Tama seems to be in charge of the Tongan Firing Squad), so it sort of felt like a ‘runners up’ match. There were the expected shenanigans to keep things interesting, but it still didn’t quite reach the heights I was hoping for

> this show began with a tribute to Masa Saito. I don’t speak Japanese (yet…) but it was hard not to get choked up at how hard the ring announcer was holding back his tears

Should you watch this event: I wondered if perhaps my preference of the B Block over the A Block was some sort of self fulfilling prophecy, but then I saw the matches on this, Day 4, and I knew that was not the case. Omega/Goto, Sabre/Yano and particularly Naito/Ishii were all fantastic matches, and well worth seeking out.