From the steel city of Pittsburgh, Pennsylvania comes WWE Extreme Rules, the one night of the year where the rules are (mostly) thrown out – except that this show only had two matches where that was the case. Following the grueling series against friend-turned-enemy Shinsuke Nakamura, AJ Styles will defend his WWE Championship against Rusev, in Rusev’s first ever one-on-one match for the title. Nakamura, on the other hand, will do battle with Jeff Hardy for the United States Championship. Which, if either, of SmackDown Live’s top titles will change hands? On the Raw side of things, Roman Reigns and Bobby Lashley will do battle to determine just who is the top dog of the red brand, while Kevin Owens will have nowhere to run as he does battle with Mr Monster in the Bank, Braun Strowman, inside a steel cage. A 30-minute Iron Man match is also set to determine the Intercontinental Champion, as two of the WWE’s top athletes, Dolph Ziggler and Seth Rollins, see who can defeat the other the most number of times inside the half-hour period. Both brands’ Tag Team Championships are on the line, and both of the Women’s Championships will also be defended among much more at WWE Extreme Rules.

+ Roman Reigns vs Bobby Lashley: first off, I was very surprised this didn’t close the show, but I suppose even the WWE didn’t want another crowd shitchanting or worse still, leaving the arena early. Secondly, I am not ashamed to admit I rather enjoyed this. These two are best when they are just smacking the crap out of each other, and they certainly did so here, though not to the extent you may want. The ending fell a bit flat, but for the most part, this was a good showing from both guys
+ The Bludgeon Brothers (Harper & Rowan) (c) vs Team Hell No (Daniel Bryan & Kane) (SmackDown Live Tag Team Championships): I enjoyed this, for what it was. The pre-match shenanigans made for some compelling drama, but it does seem to be a horrible sticking pint of the WWE (lately, in particular, but you could argue forever) to go out of their way not to give the audience what they want. Bryan and Harper deserve so much better, and even Rowan could have a huge upside more than what he is given. Kane will always be my favourite of all time, but this was good when it should have been great
+ Braun Strowman vs Kevin Owens (Steel Cage Match): this was not bad overall, but the ending was unnecessary. I still don’t quite know what to make of this whole story – Braun is very obviously the bad guy, right? Is it meant to be ironic? Or is Angle meant to be a really bad GM? Nonetheless, the ending was the highlight, and it will be a replayed highlight for years to come, I just hope the recipient is around in the coming years to watch it
+ Finn Balor vs Constable Baron Corbin: Corbin has really found his niche as the guy that beats up smaller dudes. Whether Corbin then wins or loses, he still has that credible bully persona. I enjoyed this match up far more than I thought I would, thanks in part to just how good Balor is

Real-life brothers, Bray Wyatt and Bo Dallas face off (for the first time in a WWE ring) 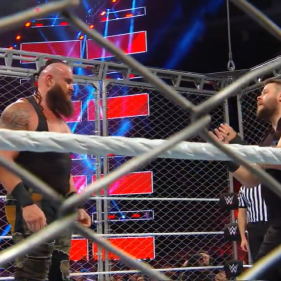 Braun Strowman shows no mercy to a begging-off Kevin Owens

– Dolph Ziggler (c) (w/ Drew McIntyre) vs Seth Rollins (30-Minute Iron Man Match for the Intercontinental Championship): it was a very bold choice to have this close the show, especially considering the way the match went. I hate Iron Man matches (and to a lesser extent, any multi-fall matches) because no matter what happens in the match, nothing matters until the final few minutes. The same was true here, with the crowd opting instead to countdown the final ten seconds of each minute as if this were a Royal Rumble match. The in-ring action was frustratingly paced, but clen and athletic as you would expect, but overall this was not a good match for either guy, with a bad conclusion and seems to be leading to a bad follow up
– AJ Styes (c) vs Rusev (w/ Aiden English) (WWE Championship): as far as big title matches go, this was perfectly fine, but lacked anything to make it special. For Rusev’s first ever championship challenge, I would have hoped these two had a much ‘bigger’ match, and when it was all said and done, despite what you think of the ending, it didn’t feel like this was anything more than a ‘filler’ match for both guys
– Alexa Bliss (c) (w/ Mickie James) vs Nia Jax (w/ Natalya) (Raw Women’s Championship): lord, this was horrible. Even the inclusion of Ronda Rousey at ringside was not enough to make this watchable. Rousey is the best athlete the WWE has, by an almost unbelievable margin, and that was so damningly clear here as she shared the ring with the bigger Nia Jax and Alexa Bliss, who is scared to even fall on her back properly. It’s a shame that Mickie James and Natalya are relegated to being the lackeys, because they are significantly better than their charges
– Jeff Hardy (c) vs Shinsuke Nakamura (WWE United States Championship): what happened here was clever, but ultimately very disappointing. The post-match shenanigans were seemingly the important part, but even that raised more questions than answers. But still, this was another negative on a show full of them
– Carmella (c) vs Asuka (SmackDown Live Women’s Championship) (James Ellsworth is suspended above the ring inside a shark cage): this was stupid. Asuka should not be in these bullshit matches, and while I can stomach Carmella as the champion this was absolutely atrocious
– The Deleters of Worlds (Bray Wyatt & Woken Matt Hardy) (c) vs The B Team (Curtis Axel & Bo Dallas) (Raw Tag Team Championships): the over saturation of 1v1 matches of these teams lately, with the other invariably at ringside, has led to this feeling stale before the teams even touched. This was such a standard match, and would still have only been an average showing in the middle of a regular Raw show

Bobby Lashley is back in the WWE to dominate

Ronda Rousey is the best athlete in the women’s division (and definitely the cutest, too) 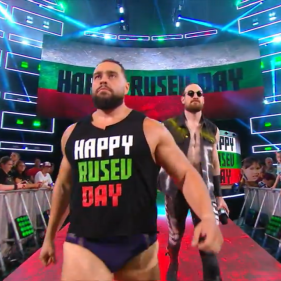 What day is it? Rusev marches towards his first ever singles championship match 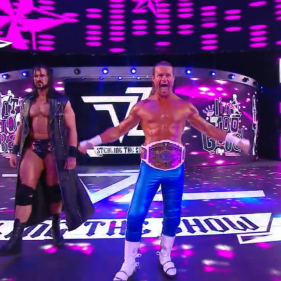 > I know the WWE is not good at booking a compelling show, but I have a few gripes in particular:
(1) the B team are such a joke team they create too many problems of their own; if the champs retain, then who cares because their challengers were jokes. If new champions are crowned, then the current champs are jokes, and the joke status waterfalls upwards (the team they beat is a joke, and whoever that team beat is a joke etc.)
(2) why is Kevin Owens the bad guy in his feud with Braun Strowman? The bigger Strowman has been tormenting Owens, who offered his hand in friendship, and so when Owens understandably tries to escape, Raw GM Kurt Angle decides to further punish Owens with a cage match? I dunno, this whole thing feels backwards, which is so indicative of the WWE over the past decade
(3) the entire rivalry between Roman Reigns and Bobby Lashley has been intense, so why then does Michael Cole insist on saying this is a battle of egos? Why can’t it just be a fight between two tough dudes? Saying these two have huge egos implies they don’t deserve to be at the top, and surely the winner of this match is the de facto ‘top dog’ on Raw, and should realistically get the Lesnar title match down the line?
(4) without going into spoiler territory, the Rollins/Ziggler match on this show really showed how dumb the WWE can be sometimes. The Omega/Okada 2 out of 3 falls match was good because the first fall was a shock roll up. The way this Iron Man match went showed the WWE has no interest in putting on a good match, even when it has two fantastic athletes who can easily go for 30 minutes or longer.

Should you watch this event: Between the booking of the Raw Tag Team Championships, Lashley/Reigns, Strowman/Owens and Rollins/Ziggler, the Raw portion of this event was the absolute weak link. Despite there being a solid number of positives listed above, this was not a good show, and you’ll be better served doing literally anything else with your time – unless you enjoy a train wreck, then just watch the Iron Man match with a bowl of popcorn and let the good times roll.