[Please note: spoilers here for every other tournament match so far, including a list of potential winners (which implies the match results to this point). Due to the nature of the brackets, I also apologise if I accidentally spoil the results from other matches on this show.]

[Also please note: I am so far behind, and by the time you read this the tournament will be over. I don’t know any spoilers, but even if you do, some of these matches may have slipped your mind. Dominion is just a few nights away, so dang, I gotta rush through these!] 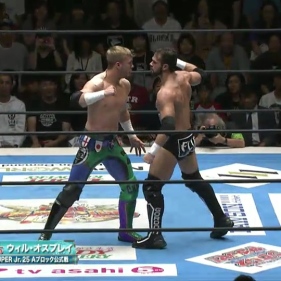 My boy BUSHI before his grudge match against Yoshinobu Kanemaru 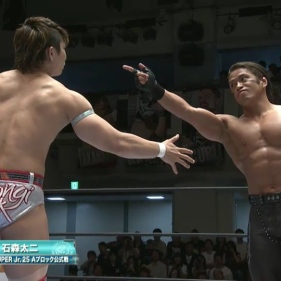 No love lost between YOH (left) and Taiji Ishimori 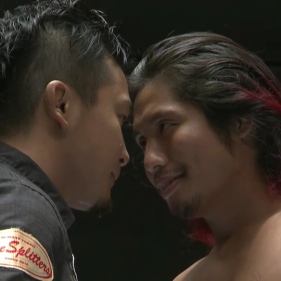 KUSHIDA versus Hiromu Takahashi: if one of them wins, they will win the B Block, but if it was a draw, Marty Scurll would steal the win.

+ KUSHIDA vs Hiromu Takahashi (B Block Match): the rivalry between these two should be compared to Hiromu/Dragon Lee in many ways. Although it doesn’t quite have the longevity just yet, the matches between these two are always fantastic, never predictable and make for jaw-dropping viewing, especially when they are in the main event. The winner here could very well have won the whole B Block (assuming things with Scurll/SHO did not go Scurll’s way), and the added stakes made everything that much more important
+ Marty Scurll vs SHO (B Block Match): this had the unenviable task of following Ishimori/YOH and preceding the main event, but these two still put on one hell of a match. Scurll is not quite the athlete that Ishimori is, but SHO had the same sort of fire as his Roppongi 3K partner, YOH, had against Ishimori. This was good, and once again I love it when a finger-break makes some sense
+ Taiji Ishimori vs YOH (A Block Match): there were some ups and downs in this match, but for the most part this was another star making performance from YOH, who has been one of the dark horses throughout this whole tournament. A ringside guest with a stake in the action kept things even more interesting, and the ending will have you either cheering or distraught along with the competitors
+ Flip Gordon vs Will Ospreay (A Block Match): I really wasn’t into this match until about the half way mark, and it quickly turned into one of Ospreay’s best this tournament, and easily one of the best in Flip’s career. Obvious flips aside, these two had such perfect timing with their strikes and counters it made for what looked like a deadly affair, though in reality it also seemed to be one of Ospreay’s safer matches
+ Dragon Lee vs El Desperado (B Block Match): holy shit, this was bloody incredible. I’m not sure when Dragon Lee became a Shibata protege, but Shibby was one of my long time favourites, so I’m all for it. A technical mistake, if you want to call it that, nearly could have been disastrous, but these two recovered so phenomenally. This was a star making performance for the winner, and di not damage to the other man, and if this is building towards what I think it is, then we are in for a big treat
+ Ryusuke Taguchi vs Chris Sabin (A Block Match): this started off as a comedy match, before getting serious as it went (Not unlike Taguchi/Scurll), and I think it’s fair to say it was not Sabin playing comedy leader here. Eventualy these two were going back and forth with huge lariats and elbow strikes in classic New Japan style and it once again made for a good contest, despite the low stakes
+ Yoshinobu Kanemaru vs BUSHI (B Block Match): neither man had a chance of winning their block, so instead they just beat the piss out of each other for bragging rights. Young Lion Tomoyuki Oka was taken out HARD off of a topé from BUSHI, and Oka had to be carried out of the arena. Overall, this was rough, but still fun
+ Tiger Mask vs ACH (A Block Match): the respect between ACH and Tiger Mask was on display early, and this was a perfectly fine opening contest between two of the more beloved competitors, though neither was elible to win the block. ACH’s chops sound like death

El Desperado, just moments before putting on the match of the night with Dragon Lee 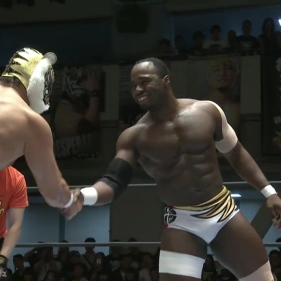 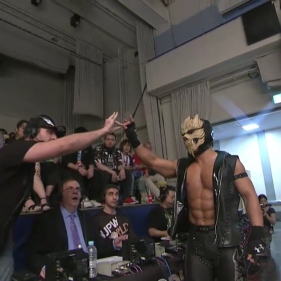 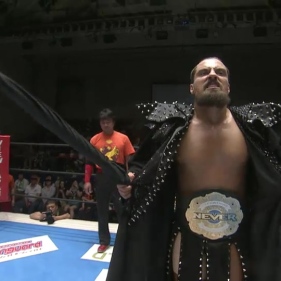 Could The Villain, Marty Scurll, sneak out a win in the B Block?

> despite the first handful of matches being between those ineleigible to win, for the most part there was another added twist to keep it interesting
> I love it when there are proper cameramen, because I can get much more aesthetic screenshots

Should you watch this event: The final eight matches, with the two block winners crowned made for a bloody fantastic watch over three easy-viewing hours. Dragon Lee/El Desperado was phenomenal, Ospreay/Flip ended up being pretty good, Scurll/SHO was surprisingly fun, Ishimori/YOH was fantatic and KUSHIDA/Takahashi was another entry in their groundbreaking rivalry.