The junior heavyweight tournament continues, as New Japan Pro Wrestling (NJPW) presents the Best of the Super Juniors 25. On day 2, the first four rounds of the B Block take center stage, and they are:
– Dragon Lee vs SHO
– Ryusuke Taguchi vs El Desperado
– Chris Sabin vs KUSHIDA
– Hiromu Takahashi vs Marty Scurll

[Please note: to save myself a bit of time, I am only reviewing the tournament matches. There will be a spoiler warning where applicable, usually for the preceding rounds from that block.]

+ Hiromu Takahashi vs Marty Scurll (B Block Match): this main event had all the trademarks of a big match, and it certainly delivered, but it was just another big match on a show of big matches. The ending was certainly interesting, and a few big moments throughout justified this getting the main event slot, but it didn’t quite top the Lee/SHO match. Still, standing on its own, this was a hell of a match
+ Ryusuke Taguchi vs El Desperado (B Block Match): Despy’s constant cheating whenever Taguchi got the upper hand was unintentionally funny, but damn Taguchi can go when he wants to (dare I say, he sort of reminds me of Randy Orton – when he feels like he can have a good match, dammit he will). The crowd was loud and active throughout, particularly when they were getting behind Taguchi, but both men did a good job
+ Dragon Lee vs SHO (B Block Match): one of the best near-countout spots in recent memory, some fantastic back and forth brawling and a huge final few minutes made this is easily going to be one of the best matches of the tournament, if not one of the matches of the year 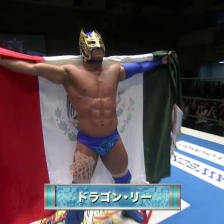 Hiromu Takahashi, with his strategy book

– KUSHIDA vs Chris Sabin (B Block Match): similar to Tiger/Kanemaru from Day 1, this felt a bit lackluster, but had a good finish. I can’t get over Chris Sabin being in the BOSJ, it just feels so random (not that he doesn’t deserve it), and his grizzled veteran shtick certainly contrasts well with KUSHIDA’s natural good-guy vibe. In the end, this was a good match on day 2 of what had been great matches, which unfortunately doesn’t quite cut it

Should you watch this event: It is only day 2 of what is going to be three-ish weeks of matches, and so far all eight have been good if not great. However, the bar seems to be set so high at any given time that only the most exceptional of matches stand out. No matter what I end up writing in any of these final judgements, basically every match of this tournament should be a good match due to the nature of the round robin battles, but I’ll only recommend the best of the best.