The second downloadable content (DLC) pack for Assassin’s Creed: Origins is The Curse of the Pharaohs. A more supernatural entry into the Assassin’s Creed series, this DLC pack sees Bayek travel to Thebes and the Valley of Kings to track down the source of a curse sweeping through the city, which has undead pharaohs and kings roaming the streets.

I reviewed the main game here, the first DLC pack The Hidden Ones here, and I wrote a short piece on where I want Assassin’s Creed to go next here. Check them out!

+ at what first appears to just be another city/farmland/desert addition to the overworld soon proves to be much more. The city of Thebes itself is dense and somewhat chaotic in design, and the Valley of Kings across the Nile is open and mostly excavated, but it is what you’ll find in the Valley that blew my mind
+ the more magical (so to speak) elements of the DLC are a welcome change of pace. The ‘Pharaohs Shadow’ mini bosses that appear randomly(ish) make for exhilarating battles, especially when you arrive to the contest late and see the city streets already strewn with their victims
+ as expected, there is another level cap increase, along with new outfits, weapons and mounts. Once again, the new outfits are unique and have become a staple of my free-play gear. A few new enemy additions also made for interesting encounters, and were always a challenge, even when I was already at the level cap 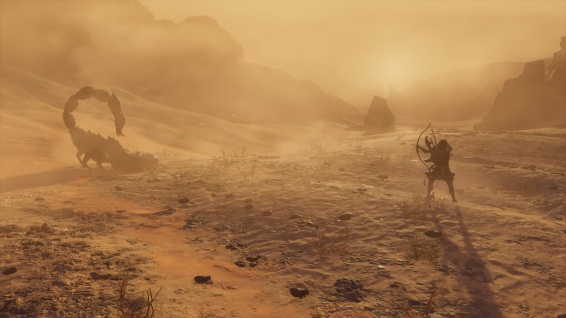 Tremble mortals and despair, for doom has come to this world

– unfortunately, my open-world-game tendencies to fully explore an area before dong quests ruined some of the surprises for myself. By the time the quest came around to explore new areas, I had already finished them, so Bayek’s scripted shocked responses seemed a bit silly

> one of the main quests is called ‘No Honor Among Thebes’. I laughed for hours

Should you play this game: Similar to Red Dead Redemption‘s Undead Nightmare, or Sleeping Dogs‘ Nightmare at North Point DLC packs, this pack adds a new twist on an already great genre game. I was blown away at how much new stuff there was here, not to mention the variety in environments once I found what I was looking for. This is one of the best DLC packs I’ve played in a very long time, and I think you’ll enjoy it too.