+ Chuckie T. vs SANADA (New Japan Cup 2018 First Round Match): I said on an earlier Day review that something about Chuckie T just doesn’t fit with NJPW, especially when compared with his tag team partner Beretta. This was a good match between two great athletes, but I’ll be interested to see how Chuckie goes for the rest of the tournament now, and further into his NJPW career. I felt like I must have been missing something when the crowd was going crazy towards the end, because I never thought it was that exciting. Also worth noting that Chuckie really does swear up a storm, even if the Japanese crowd might not understand his F-bombs
+ CHAOS (Kazuchika Okada & Tomohiro Ishii) vs Chase Owens & Kota Ibushi: I’m really enjoying the Owens/Ibushi team as of late. The subtle Bullet Club stuff in the background keeps it all very interesting. Okada really let Owens look good in this match, which is interesting as well, since Owens was not even in the New Japan Cup. Despite the Cobra Clutch winning lots of matches lately, it still doesn’t get a reaction, whether it gets the win or not. Ishii was great as always, and this ended up being pretty damn good
+ Suzuki-gun (TAKA Michinoku & Zack Sabre Jr.) vs Los Ingobernables de Japon (BUSHI & Tetsuya Naito): this was a good match. Something about TAKA is very easy to watch, and it looks like he has so much fun being such a jerk. I’m sure my love of BUSHI has been made clear by now, and Naito and Sabre, as I said regarding their NJC match, work phenomenally together
+ Tomoyuki Oka & Michael Elgin vs CHAOS (Hirooki Goto & YOSHI-HASHI): I like this Oka kid, and I am really enjoying his mini-feud with Goto over the past few shows. YOSHI-HASHI still has that post-Ibushi thing for me at the moment, so I really enjoyed this match. I honestly do think Oka will be a big star in NJPW one day
+ Shota Umino, Tetsuhiro Yagi & Yuji Nagata vs Bullet Club (Bad Luck Fale, Tanga Loa & Yujiro Takahashi): much like the oter young lions tag matches, I almost don’t need to recount this. The young lions were a lot of fun here, so it does get the positive mark, thought that is perhaps more a testament to the Bullet Club trio being effective bad guys 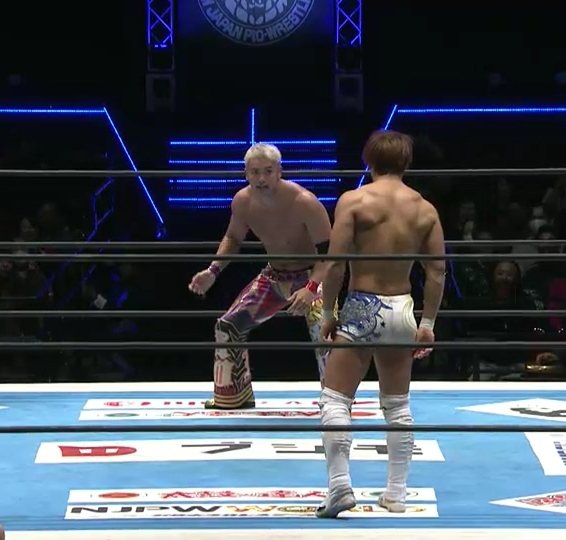 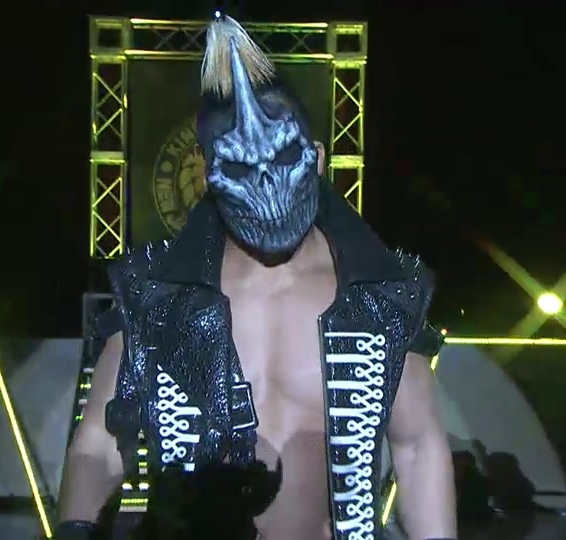 – Toru Yano vs Davey Boy Smith Jr. (New Japan Cup 2018 First Round Match): this went for too long. Yano matches, I find, need to be short and surprising, and this was neither. I did notice that the commentators called a “Crippler Crossface”, though, which these days has some very negative connotations
– Toa Henare & Taguchi Japan (Hiroshi Tanahashi, Juice Robinson & David Finlay) vs Suzuki-gun (Lance Archer, Taichi, Takashi Iizuka & Minoru Suzuki): the crowd chanting for Taichi in the opening moments was perhaps the biggest shock for me, until I saw one of my favourite moves busted out: the Pounce (aka the old Monty Brown shoulder tackle – whatever happened to that guy?). Suzuki-gunc heated, the good guys fought bravely etc. This was an acceptable match, but came across a bit lackluster
– Ren Narita & Ryusuke Taguchi vs Suzuki-gun (El Desperado & Yoshinobu Kanemaru): you should know how these matches go by now; Suzuki-gun cheat, Taguchi hits people with his ass and the young lions are improving

> I might be very late to the party here, but I’ve finally realised something about the winners of the matches on these shows, and frankly it has made the shows much less exciting. Whoever loses in the tournament matches, their partner wins the tag match for them on the next show. It is obvious booking, but it never clicked until this show

Should you watch this event: This was the end of the first round, and at least now we have trimmed some of the fat, so to speak. SANADA/Chuckie was good, Yano/Bulldog was not, but there was enough here to say that the matches I’ve listed as pluses above are worth watching. I feel like the next few shows will be must-see, but as always I’ll let you know.