We are back for Day 2 of the annual New Japan Pro Wrestling (NJPW) tournament, the New Japan Cup. Two more first round matches are on the cards, as two BIG BOIS in Lance Archer and Bad Luck Fale square off, while the main event sees Hiroshi Tanahashi doing battle with newly minted heavyweight performer Taichi. As always, tag team matches featuring various young lions, upcoming tournament participants and more make up the rest of the card.

+ Los Ingobernables de Japon (BUSHI, SANADA & Tetsuya Naito) vs Suzuki-gun (Minoru Suzuki, TAKA Michinoku & Zack Sabre Jr.): the crowd was going bonkers for Suzuki/Naito going face to face, but this was mostly built around Naito/Sabre for tomorrow’s tournament match. This was a really good tag match
+ Michael Elgin & Tomoyuki Oka vs CHAOS (Tomohiro Ishii & Toru Yano): following Ishii’s loss on Day 1, Elgin was still going super strong. Oka again looked good, especially when allowed to show off against the bigger Yano and Elgin. This was very simple, but I liked it
+ Shota Umino & Yuji Nagata vs David Finlay & Tetsuhiro Yagi: I thought this was meant to be Finlay/Juice, but obviously something changed after Juice/Yujiro went to war on Day 1. Finlay is a great wrestler, but he really could be any late 00s indie wrestler, and he really needs a personality of some kind (side note: he looks exactly like Trevor Lee). Much like the opeing tag, this was seemingly made to have the young lions look good, and for the most part they did
+ Ren Narita & Ryusuke Taguchi vs Suzuki-gun (El Desperado & Yoshinobu Kanemaru): gosh Narita is getting good, and the audience was fully behind him in everything he did. But I can’t go past my love for Desperado. This was essentially built around the improving Narita, and it ended up being a lot of fun 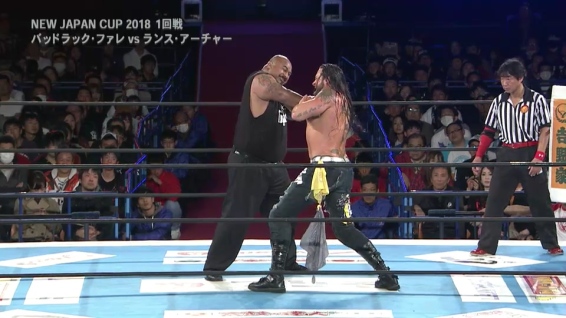 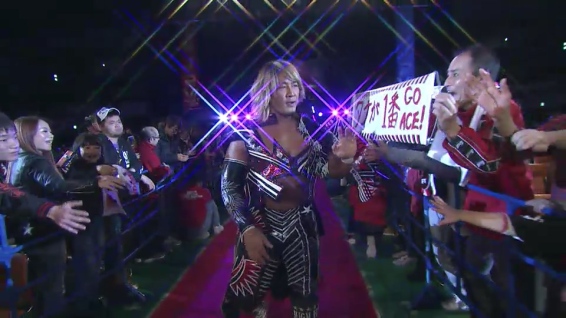 – Hiroshi Tanahashi vs Taichi (New Japan Cup 2018 First Round Match): I can’t believe I am writing this, but this was a really boring match. The crowd was, almost unbelievably, behind Taichi more than Tanahashi, at least until the ending, and I still don’t really buy Taichi as a heavyweight. I can’t believe Tanahashi came back from his injury for this
– Bad Luck Fale vs Lance Archer (New Japan Cup 2018 First Round Match): in wrestling, there are BIG BOIS, and big guys. Unfortunatley, these two are not the former. This was slow, obvious and above all boring
– CHAOS (Chuckie T., Hirooki Goto, Kazuchika Okada & YOSHI-HASHI) vs. Bullet Club (Chase Owens, Tanga Loa, Yujiro Takahashi) and Kota Ibushi: there was a surprisingly large number of miscues or timing issues in this, particularly when it involved Chuckie T. I don’t know what it is, but Okada’s insistence on gettnig that Cobra CLutch over is an issue, because it drains the crowd who want to see his Rainmaker, and it rarely ever actually beats people. Loa, Yujiro and Goto were essentially useless. This was disappointing
– Juice Robinson & Toa Henare vs Suzuki-gun (Davey Boy Smith Jr. &
Takashi Iizuka): damn the fans love Juice, and damn I love me some Davey Boy (without Lance Archer). This was essentially fine, but Iizuka and Henare together are just not that good

Should you watch this event: This was a surprisingly good show for the young lions of NJPW, but not for the New Japan Cup competitors. Neither NJC match was particularly good, and the “main” tag match was a bit of a mess. There was nothing must see on this show, so if you are behind like I am, you can safely skip this one.