Just a few weeks after sister-company New Japan Pro Wrestling celebrated an Anniversary of it’s own (reviewed here), Ring of Honor (ROH) wrestling comes live from Las Vegas for it’s own 16th Anniversary! Headlined by a huge ROH World Title match between the current champion, the flamboyant Dalton Castle and arguably the greatest former champion, Jay Lethal, this is set to be a show to remember. Also on the card are three other title matches: firstly, The Hung Bucks (Adam Page, Matt Jackson & Nick Jackson) take on SoCal Uncensored for the ROH Six Man Tag Team Championships in a Las Vegas Street Fight; then, Kenny King defends his ROH Television Championship against The Last Real Man in Professional Wrestling, Silas Young; and finally, The Motor City Machine Guns (Chris Sabin & Alex Shelley) defend their ROH Tag Team Championships against The Briscoes (Mark and Jay Briscoe) in a grudge match many months in the making. Marty Scurll will also face off against Punishment Martinez for the number one contendership for the ROH World Championship, Cody will face off against The Kingdom’s Matt Taven, and NJPW superstar Hiromu Takahashi will face off one-one-one with Flip Gordon.

+ The Hung Bucks (Adam Page, Matt Jackson & Nick Jackson) (c) vs SoCal Uncensored (Christopher Daniels, Frankie Kazarian & Scorpio Sky) (Las Vegas Street Fight for the ROH World Six-Man Tag Team Championships): this was violent, and this was bloody (for the second or third match on the show), and was generally what you’d expect. The Bucks and Page were beloved by the crowd, while SoCal were hated, which made for a memorable crowd response throughout. A few shenanigans late in the match were interesting, but in the end this was a standard, but very enjoyable six-man match
+ Cody (w/ Brandi Rhodes) vs Matt Taven: Cody is a fantastic hype-man, and he is certainly becoming a “great big match wrestler”, but he is not there yet. Matt Taven, and indeed all of The Kingdom, are just there, able to put on good matches but that’s all. This was indeed a good, technically well wrestled match, but it was basically all a set up for the post match shenanigans, which should not be a surprise to anyone
+ Kenny King (c) vs Silas Young (ROH World Television Championship): I’m not sure what the “popular” opinion is on Silas Young is, but I think he is one of the most underrated guys in wrestling at the moment. Kenny King is a phenomenal athlete, and both of these two put on a hell of a title match, even if there were a bit too many referee shenanigans for my liking. The post-match may well be as important as the match itself, and I never saw it coming
+ Flip Gordon vs Hiromu Takahashi: stemming from the fantastic triple threat at Honor Rising (also involving KUSHIDA), this was an incredible way to start the main PPV. Flip has that ‘goofy-until-he’s-serious’ thing that is always a bonus in this sport, and Takahashi is just one of the best Juniors on the planet right now. This lived up to the high standards I had going in
+ Sumie Sakai vs. Hana Kimura (Women of Honor Championship Tournament First Round Match): I admit, I was not familiar with either woman but was still enthralled with their match. This was a classic good vs bad affair, and perhaps my lack of pre-conceived notions helped that. This was not a spectacular, technical match, but still a lot of fun 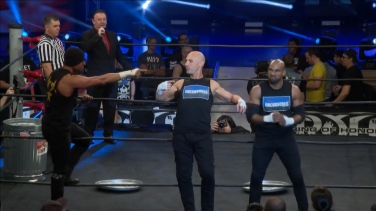 – Dalton Castle (c) (w/ The Boys) vs Jay Lethal (ROH World Championship): I’m a big fan of Castle, and I fully appreciate just how damn good Lethal is, but this match felt like it was trying too hard to be a big, long “epic” rather than letting it build organically. A couple of big moves and a few surprising comedy spots added quick excitement, but still, something about this match never felt as big as the commentators would have you believe
– The Motor City Machine Guns (Alex Shelley & Chris Sabin) (c) vs The Briscoes (Jay & Mark Briscoe) (ROH World Tag Team Championships): another bloody match, with Mark Briscoe getting hie eye messed up quite severely, and I’m not sure if it was intentional. The crowd was still buzzing form the aftermath of the Cody/Taven match-up, and weren’t making much noise for this match. I think Mark’s eye injury stunted a lot of this match, with the flow seemingly being interrupted from the beginning. I expected more, but I should note this was mostly due to the unfortunate injury
– Punishment Martinez vs Marty Scurll (ROH World Championship #1 Contender): I’m a big Scurll fan, and Martinez is always just on the cusp of being someone I enjoy. This was a fine match which built itself up based on previous encounters, but something about it never clicked for me. Maybe I was just expecting something more, but it was tame for a hardcore fight, but too violent for a straight-up match
– Brandi Rhodes vs Tenille Dashwood (Women of Honor Championship Tournament First Round Match): Dashwood (the former Emma in WWE) is just fantastic, and a real loss to that company. Conversely, Rhodes is still only improving, so I am confident in saying this was an okay match based nearly entirely on Dashwood, but not good enough to earn a passing mark

Should you watch this event: Despite the even split of positives and negatives above, this was an easy to watch show with nothing overly “offensively” bad. A few matches had some strange finishes, or spots within that felt out of place, but overall every match will have something for everyone, and this is worth watching with at least half of your attention.