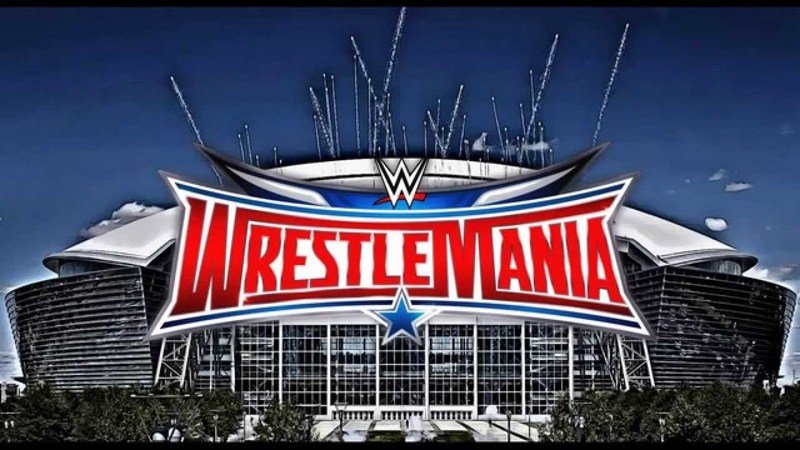 As the road to Wrestlemania rounds its final bend, Roman Reigns finds himself, once again, staring down the finish line and the prize at the end of the run. This year, however, he is going one on one with the COO of the WWE, The WWE Heavyweight Champion Triple H. Will there be even more shenanigans, or will the Big Dog, Roman Reigns, reach the mountain peak for the third time? The Undertaker has been the lifeblood of the WWE for years, but his opponent at Wrestlemania, Shane McMahon, has the WWE in his veins. When it’s a match where winner takes all, who will end the night with control of the WWE? The Divas Revolution showed the world what women could do, and when Charlotte, accompanied by her two-time Hall of Fame father Ric Flair, has to defend her Divas Title against two of the best in the company today, will the Irish Lass-kicker Becky Lynch finally achieve her girlhood dream, or will Sasha Banks prove why she is a Legit Bo$$? The WWE takes over AT&T Stadium in Dallas, Texas, for Wrestlemania 32!

+ Shane McMahon vs The Undertaker (Hell In A Cell for control of the WWE): this is some video game fantasy booking. Hard to believe this match happened, let alone just how far these two were willing to go for the entertainment of us plebs. This match was intense, violent, and probably life threatening, and that made it a pleasure to watch
+ Charlotte (c) (w/ Ric Flair) vs Sasha Banks vs Becky Lynch (Women’s Championship Triple Threat): two of the three got special entrances (and it’s not hard to guess which of the three the WWE thinks the least of), and they were just the opening to a fantastic contest. If the Divas Revolution showed us what the Divas should have always been allowed to do, this new Women’s Evolution, if you will, is only a good sign
+ Dolph Ziggler vs The Miz vs Sami Zayn vs Stardust vs Sin Cara vs Zack Ryder vs Kevin Owens (c) (Intercontinental Championship Ladder Match): the traditional Wrestlemania “throw them all in and see what happens” match, and again, it worked a treat. Considering the, let’s say, lack of star power in the match, this could have been a throwaway, but it turned out far better than it had any right to be

– Triple H (c) (w/ Stephanie McMahon) vs Reigns (WWE World Heavyweight Championship): gosh darn this was a boring, poorly paced and all around horrible match. Aside from a single moment of hype, this match went exactly as you would expect, from start to finish. You’ll hear all about it, though, so don’t even bother thinking about it
– New Day vs League of Nations (Rusev, Sheamus and Alberto Del Rio (w/ King Barrett)): holy crap the New Day entrance. Might be my favourite yet. This was changed from a handicap match to a straight 3-on-3 and I think that was a bad decision. The match played like a standard RAW match, and it went about as you’d expect
– Dean Ambrose vs Brock Lesnar (w/ Paul Heyman) (No Holds Barred Street Fight): this was another let down, in a match that on paper could have been a huge success. A very tame use of weapons, and a seemingly very rushed finishing sequence left far too much to be desired
– AJ Styles vs Chris Jericho: this could (and should) have been the sleeper hit, when two of the best in the world face off, but something about this match just didn’t click for me, and I think the live crowd felt the same. Aside from a few loud cheers for the finish, there was not a lot on offer here
– Kalisto (c) vs Ryback (United States Championship): on paper this sounded like a good David vs Goliath match, but it was just the exact same match we’ve seen on Raw so many times over the past few months. nothing special at all
– The Usos vs Dudley Boyz: the final match on the kickoff was slow and boring, very out of place for a ‘grudge match’. Hardly worth a showing on RAW, let alone Wrestlemania
– 3rd Annual Andre The Giant Memorial Battle Royale: this was what it was, a cool down match between the two big matches. It was fine, with a handful of surprise participants, but once it was clear someone was involved, it also became very obvious who was winning
– Total Divas vs Bad and Blonde: this was about as you’d expect. Not even wasting my time naming the teams. Horrible

Should you watch this event: Absolutely not. Literally the worst event I have watched in a very long time. Every match had a strange, if not outright bad finish, and the off time was spent showing just how shit the real roster is compared to the various legends they could pull from retirement. Try to watch the Divas triple threat, because they don’t deserve to be dragged down by the rest of the crap put on display for us.